"Shark Tank" investor Kevin O'Leary reacts to an episode of Millennial Money, featuring Sahil Mehta, 25, who lives in Berkeley, CA and earns $515,000 a year as a real estate investor and developer for Golden Gate Sotheby's. Sahil and his brother Suyash own five properties in the area.

What's your budget breakdown? We're looking for stories from all ages, not just millennials! Share your story with us for a chance to be featured in a future installment of Millennial Money: ​https://cnb.cx/32TYZ2K​

It’s hard to find fault with many facets of Sahil Mehta’s finances.

At just 25, he’s earning $515,000 a year between his full-time job as an executive assistant for a real estate agent at Golden Gate Sotheby’s and operating five rental units in his spare time in Berkeley, California. He saves a healthy portion of his income and keeps discretionary expenses relatively low.

“Twenty-five years old, living on over half a million dollars a year. That’s not really that hard to do,” O’Leary jokes.

That said, some of Mehta’s money moves can be adapted by just about anyone who wants to better their finances. A big one: contributing to an individual retirement account. Mehta invests $1,500 per month, but most financial experts say to aim to invest 10% to 15% of your income for retirement.

“Puting it aside into an IRA is a fantastic idea because you want it to start compounding at 6% to 8% a year,” O’Leary says, alluding to stock market historical returns, which are not guaranteed. “That’s what you’re putting aside for your nest egg when you turn 65.”

O’Leary was particularly impressed with Mehta’s ability to turn what could have been a source of trauma — his father losing his job during the 2008 recession — into a source of strength. Not wanting to be financially vulnerable in the way his family was during his childhood pushed Mehta to move to California on his own at 16, attend and graduate from college early and start his now-flourishing career in real estate.

Now, Mehta invests heavily in himself and saves around $10,000 a month to put toward future property purchases. He’s doing so well, in fact, that O’Leary has trouble finding fault with much of anything.

Watch the full video to see what else O’Leary has to say about Mehta’s finances.

About CNBC Make It.: CNBC Make It. is a new section of CNBC dedicated to making you smarter about managing your business, career, and money. 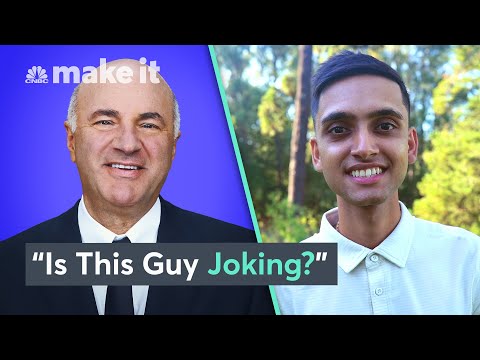