Kentucky Gov. Andy Beshear, alongside federal officials, provided an update Sunday on the state's response to the damage caused by severe storms and tornadoes that tore through multiple U.S. states Friday night and early Saturday morning.

Beshear detailed the damage across 18 counties, saying one tornado tore across 365 km of terrain, almost all of that in Kentucky. He said at least 80 people in the state were confirmed dead, and the toll will eventually exceed 100.

The tornadoes knocked out power to between 36,000 and 50,000 homes, Beshear said. More than 300 members of the National Guard are going door-to-door and removing debris, while teams work to distribute water and generators.

The head of the U.S. Federal Emergency Management Agency (FEMA), Deanne Criswell said Beshear has asked the federal government to declare the state a major federal disaster. Criswell said if the request is granted it will pave the way for additional federal resources to be provided.

The tornadoes hit Kentucky, Illinois, Arkansas, Missouri and Tennessee. More than a dozen tornadoes were reported. 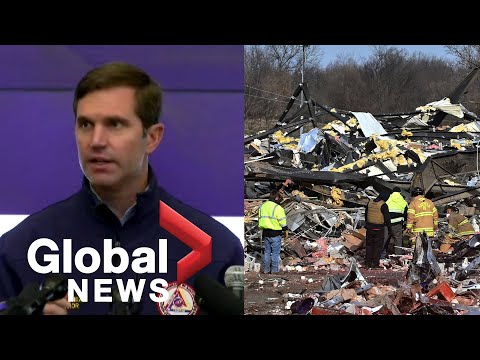 Kentucky Gov. Andy Beshear, alongside federal officials, provided an update Sunday on the state's response to the damage caused by severe storms and t...