Judas Priest: The Lawsuit Over Better By You, Better Than Me That Shook The Metal World

Judas Priest: The story behind the infamous lawsuit over subliminal messages.

n 1969 English rock band Spooky Truth would release a song called "Better by You, Better than Me" The song would appear on Judas Priest’s 1978 album Stained Class. Then 7 years later on December 23, 1985, two young men an 18 year old named Raymond Belknap and 20-year-old James Vance who hailed from Sparks, Nevada spent the night drinking and smoking pot and listening to Judas priest before madeking a pact to take their own lives. The pair of men went to a nearby playground at a church and attempted to take their own lives with a shotgun. Belknap would die instantly while the Vance would survivebut only live for another 3 years before passing away..The LA Times reported his passing in 1988 claiming he was admitted to a hospital for depression before slipping into a coma and passing away. The paper claimed that a drug overdose may have resulted in him lapsing into a coma. It was also revealed that vance left behind a one year old daughter.

The families of the victims turned their anger towards Judas Priest and their label CBS Records. They blamed both parties for their son’s deaths alleging that the band hid submliminal messages on their cover of better by you, better than me which could be found if the track was played backwards. Amongst these submliminal messages they alleged to be included on the recording were ‘do it’ and ‘let’s be dead’ The lawsuit was spurred after the lone survivor James Vance wrote a letter to Belknap’s motherwhich read and i quote “ I believe that alcohol and heavy-metal music such as Judas Priest led us to be mesmerised,” A civil lawsuit would be filed in 1986, one year after the incident, but wouldn’t go to trial until 1990 in the pair’s home state of nevada. The families sought a minimu mof $3.6Million in damages to cover,\ medical bills and support for Vance’s daughter.


It was two years prior that Ozzy Osbourne had been involved in a similar case over the lyrics of one of his songs which allegedly drove a fan to take his own life. But unlike the Osbourne lawsuit which was thrown out of court because Ozzy’s lyrics were protected under free speech. The same couldn’t be said for Judas Priest. Technically, subliminal messages aren’t considered speach therefore they don’t have the same protection. The case involving Judas Priest became more about whether there were subliminal messages, whether they were discernible to the average listener and whether they could influence someone’s thinking. It may surprise you to know that the complainants originally took the band to court over another song called ‘Heroes End’ from the same album. Jayne ANdrews who served as a member of the band’s management team would reveal that the complainants took issue with the lyrics on the song with Andrews recalling: “They tried to say the band were saying you could only be a hero if you killed yourself, till I had to give them the correct lyrics which is ‘why do heroes have to die?’ Then they changed their plea to subliminal messages on the album.”

Guitarist Glenn Tipton would tell Loudersound “It’s a fact that if you play speech backwards, some of it will seem to make sense. So I asked permission to go into a studio and find some perfectly innocent phonetic flukes. The lawyers didn’t want to do it, but I insisted. We bought a copy of the Stained Class album in a local record shop, went into the studio, recorded it to tape, turned it over and played it backwards. Right away we found ‘Hey ma, my chair’s broken’ and ‘Give me a peppermint’ and ‘Help me keep a job’.”

The lawyers for Judas Priest and the label contended that the band had no known subliminal messages on the record and questioned the character of the two young men pointing to their troubled upbringing as being responsible for their deaths. The LA Times even wrote a profile during the trial on the mothers of the two men and it was less than flattering.

The article would state that Belknap’s Mother had been previously married four times and that her son was the subject of abuse from her fourth husband going on to write
“Belknap showed no interest in school, and like Vance, dropped out in the 10th grade. Working a series of construction jobs, he acquired a sawed-off shotgun, a pell

Judas Priest: The Lawsuit Over Better By You, Better Than Me That Shook The Metal World 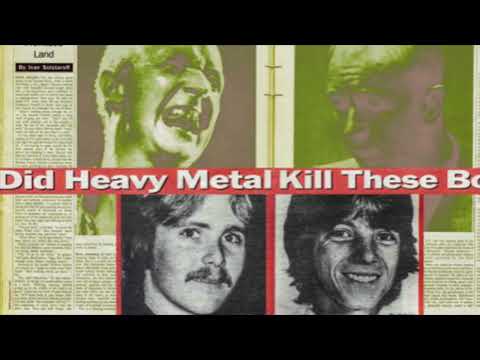 Judas Priest: The story behind the infamous lawsuit over subliminal messages. SIGN UP for 10 of the Craziest Stories in Rock N' Roll [Secret Playlist]...