In 2015, my freshman year of high school, I started the Twitter account @MLBRandomStats. In the years since, the account has grown in both followers and credibility within the baseball industry. I've been quoted by The New York Times, Washington Post, ESPN, MLB, CBS Sports, FOX Sports, several MLB broadcasts, and more.

Through interactions online, I began to understand how many other kids there were like me, just without the platform, so I founded Diamond-Digest.com in 2017. The site gives a platform to aspiring baseball journalists, graphic designers, and social media managers so they can gain experience and a well-deserved audience.

I've also authored a nonfiction book series, "Hidden Ball Trick: The Baseball Stats You Never Thought To Look For" (currently 2 of 3 are available), which takes a look back at the history of the game of baseball through a statistical lens. My success in the baseball industry through high school even warranted a news segment about me on CBS2-Chicago and an in-game interview on ESPN.

In the summer of 2021, I was a data intern for Sports Reference where I gained experience with all aspects of SQL.

I currently am a data science student at Purdue University with minors and mathematics and economics. I work part-time for Sports Reference as a researcher where I continue to use my skills in SQL.

Hidden Ball Trick: The Baseball Stats You Never Thought To Look For goes year-by-year throughout the history of baseball, starting with the founding of the National League in 1876 until the end of the Dead Ball Era in 1919. With a few pages dedicated to each season, Hidden Ball Trick tells a near century-and-a-half long story about baseball's history through it's craziest stats, wildest events, and mindblowing seasons starting with the Dead Ball Era.One doesn't have to be a statistics professor to appreciate the game from a numerical perspective; Hidden Ball Trick's simplicity appeals to everyone from a baseball card collecting little leaguer who grew up watching Mike Trout play, to their 80-year-old grandparent who had the same connection to Willie Mays. Written by a teenager and a cable guy who share a love for the world's greatest sport, Hidden Ball Trick is sure to be enjoyable and informative to anyone who loves the game of baseball. 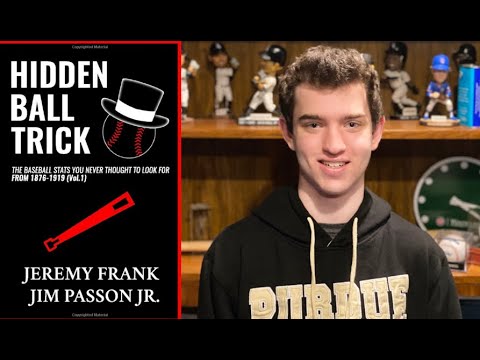 ABOUT JEREMY FRANK: https://twitter.com/MLBRandomStats In 2015, my freshman year of high school, I started the Twitter account @MLBRandomStats. In the...