Jeremy Corbyn has told Times Radio he thinks NATO should be "disbanded" along with all with "all military alliances".

Speaking to John Pienaar on Drive in an interview due to be broadcast after 4pm today, the former Labour leader also refused to rule out setting up his own party at the next General Election.

ON NATO BEING DISBANDED

JC: "I would want to see a world where we start to ultimately disband all military alliances. The issue has to be what's the best way of bringing about peace in the future? Is it by more alliances? Is it by more military build up? Or is it by stopping the war in Ukraine and the other wars, which you haven't mentioned at all in this discussion that are going on at the present time, which are also killing a very large number of people? And ask yourself the question, do military alliances bring peace? Or do they actually encourage each other and build up to a greater danger? I don't blame NATO for the fact that Russia has invaded Ukraine, what I say is look at the thing historically, and look at the process that could happen at the end of the Ukraine war."

JP: "Your conclusion at the end of the argument you've just given is that it would be right to disband NATO, now?

JC: "Look, it's not going to be disbanded now. What I think will happen is some kind of much deeper security discussion, as indeed NATO was having a security discussion with Russia until last year. They were even having joint exercises only three years ago. My view is that military alliances tend to build up a mirror image of each other."

JP: "Were you to be Prime Minister today, I just was looking for a very clear one word answer, you would be supplying all the weapons that this country and others are supplying?"

JC: "I would be supporting Ukraine's right to defend itself. But I would be also making the point which I've made in this interview, that we have to also be, which I don't detect from anything Boris Johnson or Biden have said, actually demanding some kind of dialogue and peace."

ON SETTING UP HIS OWN PARTY

JP: "Is it your hope that your constituency now, Islington North, stands by you at the next general election?"

JC: "My Labour Party membership was briefly suspended. I was reinstated as a party member unanimously by a panel of the NEC of National Executive Committee of the party. Subsequently, I lost the Labour Party whip, therefore not a member of the parliamentary Labour Party. I think it's a wrong, totally unjustified decision. And the local party members and the constituents I speak to, and I speak to a very large number of them, feel it's extremely wrong and unfair, and they hope that maybe it's a good opportunity after the local elections that the whip should be restore."

JP: "Would you rule out starting a new political party maybe building on your peace and justice project?"

JC: "I don't know what the future is going to bring. I am focused on representing my constituency, being a member of parliament and on saying to the Labour Party, to win the next election, you have to appeal to people. And you have to appeal to people on the basis of economic justice and changes in the power structures within our society. Abandoning policies that would achieve that, particularly public ownership, is not going to excite people."

---
Times Radio brings you the latest breaking news, expert analysis and well-informed discussion on the biggest stories of the day. 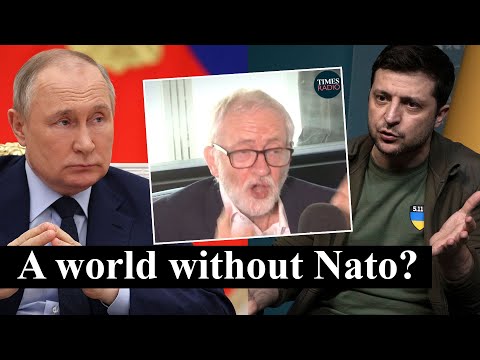 Jeremy Corbyn has told Times Radio he thinks NATO should be "disbanded" along with all with "all military alliances". Speaking to ...