Tesla has not only revolutionized the electric vehicle, but it has revolutionized how
vehicles are made! With its Giga Presses, the company has accelerated its production
but is not done yet as it has started working on a bigger and more powerful Giga Press!
What extra capabilities does this newly improved Giga Press have?
Join us as we dive into Tesla finally testing their new Giga Press!
What is a Giga Press?
A Giga Press is one of the biggest machines in the world. They are presses used to
make components in a single large piece through die casting. To do this, they produce a
large amount of force for extrusion or injection. These machines capable of more than
5000 tons are made by an Italian company named IDRA Group, a subsidiary of LK
Tech.
And no, Tesla did not name the Giga Press, even though it sounds like a name Tesla
would come up with. IDRA did.
These machines are huge! Imagine a machine as big as your whole house! You build
your factory around them.
IDRA boasts that the Giga Press saves 40 percent on energy consumption and more
stable injection conditions for manufacturing even thin walls.
The Giga Press fits into Tesla's car production because the EV company wants to make
some parts of its cars in a single large piece.
Many car makers use die casting for portions of the chassis that benefit from localized
stiffness, such as shock towers, but Tesla uses the Giga Press to replace the entire
front and rear sections of the chassis, which replaces multiple stampings that would
have then been fastened together.
Tesla has used the Giga Press in its production of the Model Y, with significant gains.
First, despite being massive, the Giga Press has helped Tesla save on the body shop's
size by 30 percent! This means more production can take place in the same plant.
The Giga Press was a drastic production and design change for Tesla because instead
of managing 70 pieces of metals, it now handles a single die cast part, which is very
efficient manufacturing!
This claim was corroborated by Tesla's official Twitter account, calling it the world's
biggest die casting machine.
Show these tweets:
https://twitter.com/Tesla/status/1357503277722718212?s=20
https://twitter.com/Tesla/status/1357503279475920897?s=20
It would need fewer factory hands; JP Morgan claims that is 20 percent savings in labor
cost. It also means less logistics or transportation, less storage spaces, etc.
Giga Presses also improves the quality of the finished product. Since there is no
welding or riveting involved, this is a single piece; the potential misalignment problem is
non-existent!
Joining those seventy pieces is no fun either. It involves sealing between them, and
Musk calls the job a nightmare!
Using Giga Presses lets Tesla move on to structural battery cases as it has been
planning to do for a while. He said at Tesla's Battery Day event that Tesla had finally
figured out how to do it.
These battery packs serve as the stressed center member of the vehicle platform that
will connect the front and rear die castings. Structural batteries are the way forward for
Tesla because they are lighter and pack the cells more efficiently.
Musk calls the current way of packing battery cells a sack of potatoes that do not have
any structural value and even have to be isolated from the rest of the car and protected
from vibration and shock loads.
But the structural battery arranges the cell like a honeycomb which makes it very stiff.
According to Musk, these changes made possible by the Giga Presses decreases
manufacturing cost and complexity. It also reduces the finished car weight, a boost for
the driving range.
The Giga Presses will also make the battery packs after it has started making the front
end. When the three parts are made through die casting, Tesla will eliminate not only 70
parts but 370 parts!
Car parts are not the only things the Giga Presses will eliminate. Manufacturing robots
are going as well. Musk said making the rear end from a single cast replaced 300
robots. With the front end also coming from these presses, that is another 300 retired
robots. And that is before getting to the battery packs!
Robots are fast, no doubt. But setting them up takes time. They have to be positioned
accurately, bolted down to the factory floor securely, and tested rigorously to make sure
they all work together. They also need maintenance to retain their accuracy and speed.
So getting rid of them is a big deal.
It is also a kind of poetic justice; these robots have made humans lose their jobs, now it
is their turn to become redundant, thanks to the Giga Presses!
For context, Musk says there are 1000 robots involved in the Model 3 body line, but the
Giga Presses will help to get rid of at least 600 of them!
Before getting the Giga Presses, Tesla managed as much as they could, but Musk
knew die casting was the best way to make cars.
Musk believes other car makers will start using Giga Presses to make their cars, at least
electric car makers. 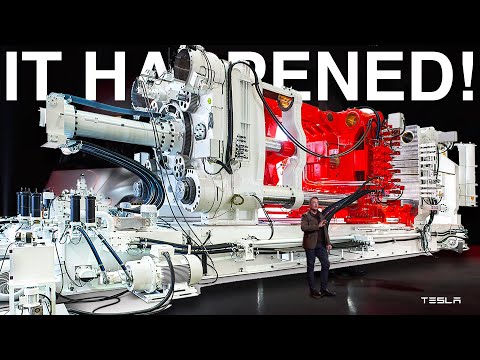 Tesla has not only revolutionized the electric vehicle, but it has revolutionized how vehicles are made! With its Giga Presses, the company has accele...