Shocking images of Iranian women writhing in agony after they were allegedly pepper-sprayed while trying to get into a World Cup qualifier game have emerged from the hardline Islamic Republic.

Grim footage shows women and young girls clearly in severe pain after they were refused entry to Iran's match against Lebanon.

It is still unclear whether FIFA officials plan to step in after viewing the video.

Local TV failed to report the attack on women and the Iranian Football Federation has not apologised to the victims.

Iran went on to beat Lebanon 2-0 in the Iranian city of Mashhad on Tuesday.

As South Korea lost to the UAE, Iran secured qualification to the Qatar World Cup at the top of the Asian table.

Local reports said around 12,000 football fans showed up at the match, including around 2,000 women, who were forcefully kept out of the stadium.

Several videos show women struggling on the ground and children crying after they were reportedly targeted with pepper spray to stop them from entering the stadium.

Local reports also said that Iranian state TV did not report on the incident.

But footballer Alireza Jahanbakhsh mentioned it in passing in his post-match interview.

He said: "I hope that from now on during home matches, our dear women can also watch so we can make them happy as well."

The interview was reportedly edited for later showings to avoid mention of the helpless female victims.

The Iranian Football Federation not only failed to apologise for the disturbing scenes but also stated that women were not allowed into the stadium.

They claimed only nine women had bought tickets in the men's section and that they will be refunded.

After the 1979 Islamic Revolution in Iran, women were banned from entering stadiums and have only been allowed back into grounds since 2019, following pressure from FIFA and other international organisations.

But women are still reportedly being barred from most fixtures.

It is unclear if the Iranian Football Federation will face punishment for the treatment of the women outside the stadium.

Just three years ago, an Iranian woman facing charges of sneaking into a match disguised as a man set herself on fire rather than face trial. 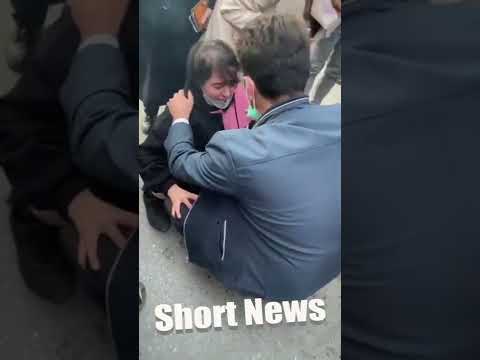 Shocking images of Iranian women writhing in agony after they were allegedly pepper-sprayed while trying to get into a World Cup qualifier game have e...