Everything you need to know about the iPhone 14 Emergency Satellite SOS feature, actually tested in the real world with real satellites and emergency relay centers.

Starting today, users in the US & Canada will be able to use their iPhone 14 units to trigger an emergency SOS, even in areas without cellular coverage. It does this using a network of 24 low-earth orbit satellites that the iPhone can connect to. This allows you to send very short low-bandwidth emergency text messages to earth-based ground stations, which in turn get routed directly to either emergency responders or to Apple relay centers, which coordinate with emergency responders. While today’s launch is limited to the US & Canada, starting next month it’ll open up to certain countries in Europe (more on that in the next section).

At present, this feature is all about emergencies – and sending a selfie text message, or even a short ‘goodnight’ message doesn’t qualify. Instead, this is focused on routing you directly to first responders that can get you out of whatever pickle you’ve gotten yourself into. It’s roughly akin to other platforms that already exist today, such as Garmin’s inReach devices, or SPOT’s devices – both of which use satellites. 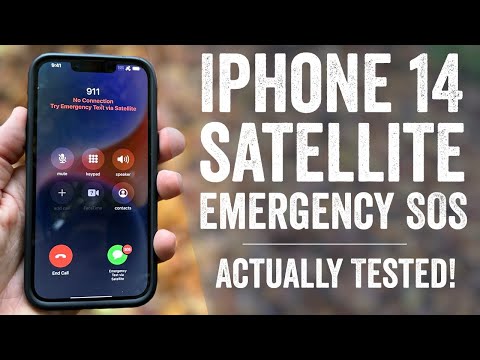 Everything you need to know about the iPhone 14 Emergency Satellite SOS feature, actually tested in the real world with real satellites and emergency ...