Penn State starting linebacker Curtis Jacobs joins the BWI Daily Edition for an exclusive interview. He sits down with host Thomas Frank Carr to discuss his path to his new position, how he sees the game of football, and what makes him tick. Be sure to check out both installments of the interview.

T-Frank starts out by taking Jacobs back to Penn State's bowl game performance against Arkansas. Like several of his teammates, he played a new position filling in for a veteran who had opted out of the game for the NFL Draft. How comfortable was he at WILL linebacker after practicing for a month? Jacobs said it wasn't about playing the run in the tackle box but about playing every down for the defense.

"Honestly, the best part of it was being able to play third down. I feel like that was a big part of my game I didn't get to show because of personnel, and I felt like that was a really big opportunity for me," he said

Jacobs came off the field in favor of slot corner DaeQuan Hardy in obvious passing situations throughout last season. But how was playing a new position? Jacobs says it wasn't about playing in a new spot but keeping the same trust in his teammates,

"My comfort comes from just being able to trust my teammates and I had full trust in my teammates. I would say I felt pretty comfortable, and now I'm just running with it. I feel like I've hit the ground running, and I feel like I'm in for a big season next year."

Jacobs will take on the playmaking role of Will linebacker full-time next season in Manny Diaz's new scheme. He discusses the nature of that system with T-Frank, how he enjoys playing for Diaz, and how aggressive the team will be.

They also discuss his fellow linebackers, Kobe King and Tyle Elsdon, who are battling for the starting middle linebacker position. Jacobs shares what he's seen from them in that endeavor and tells T-Frank a bit about who they are as people.

T-Frank also brings up the topic of size and linebackers in college football. Jacobs plans on playing at 227 pounds this year, which is typically lighter than traditional linebackers. However, this isn't new to Jacobs, as this is how linebackers play in college football. T-Frank wants to know how Jacobs feels about the situation and if he thinks his style of play will hold up to the physicality of the Big Ten. Jacobs points to factors beyond weight that mean more in how a player performs on the field.

They also discuss the differences between his old position (SAM Linebacker) and his new one. Jacobs tells T-Frank that he actually misses one part of his old job. Other topics of conversation include modern ways that teams are attacking linebackers. Jacobs tells T-Frank that his belief that linebackers "can't be right" because of RPO passes isn't accurate. He explains what he does to sniff out plays in that situation. Finally, they discuss Jacobs' interests off the field and what makes him tick as a person. 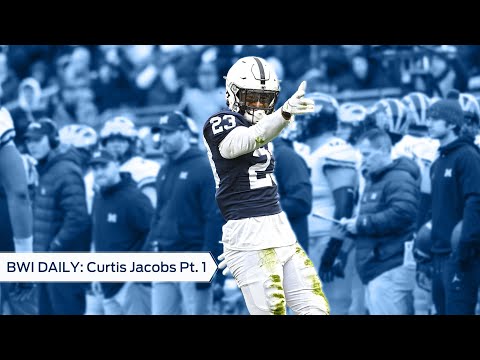