International Migration, Emerging Sub-Populations and Human Rights in Trinidad and Tobago: Maximizing the Benefits and Minimizing Threats to National Development

In Trinidad and Tobago and indeed, many Caribbean nation states, international migration continues to be a social event that will impact population and social policy agendas. In all of its manifestations, international migration will become an increasingly important human phenomenon in the 2020s and beyond as countries seek to maximize the benefits and minimize the threats impacting their respective national development goals. Whether in the context of immigration or emigration, a variety of sub-population groups are active and passive players subjected to the mercies of a host of critical institutional forces including the state, civil society organs and international bodies.
This virtual forum draws on the insights of key commentators who can illuminate these issues and stimulate constructive discussion and debate to inform critical stakeholders who by virtue of their respective callings ought to promote the common good that is resident in societies such those in the Caribbean.
International migration as a process tantamount to the spatial movement of human populations across international borders, brings with it a host of human rights concerns that ought to be the subject of constructive commentaries by actors who are best placed to address such issues. The promotion of messages that recognize the primacy of preserving human rights in development discourses is of primary importance in this forum. Thus, standards that seek to reduce inequities and inequalities in a manner that enhances the material well-being of foreign-born and native-born populations remain paramount among development goals destined to assure the vitality, viability and sustainability of Trinidad and Tobago in the future. Implicit in these discourses are lessons that can be positively applied in similar nation-state jurisdictions. 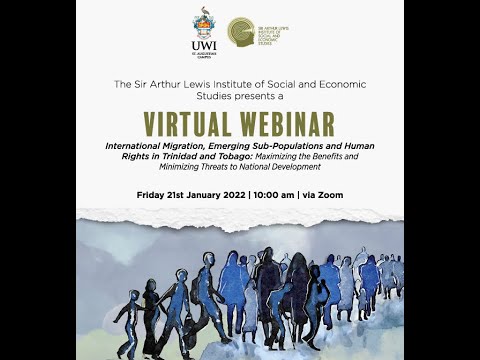 International Migration, Emerging Sub-Populations and Human Rights in Trinidad and Tobago: Maximizing the Benefits and Minimizing Threats to National ...