An international diplomatic storm has engulfed India’s ruling Bharatiya Janata Party (BJP), the party of Prime Minister Narendra Modi, following the sanctioning of two party spokespersons over insulting remarks the pair are reported to have made towards Prophet Muhammad.
BJP national spokeswoman Nupur Sharma was suspended from the party’s primary membership on Sunday for comments made in a recent television debate, while the BJP’s Delhi media operation head Naveen Kumar Jindal was also expelled, according to BJP documents and media reports.
The remarks have been blamed for clashes in an Indian state and have also prompted demands for the spokeswoman’s arrest in India.
India’s ambassadors to Kuwait and Qatar were summoned on Sunday to receive official notes of protest over the comments, and Pakistan’s ministry of foreign affairs issued a statement condemning the “highly derogatory remarks” and the BJP’s response. 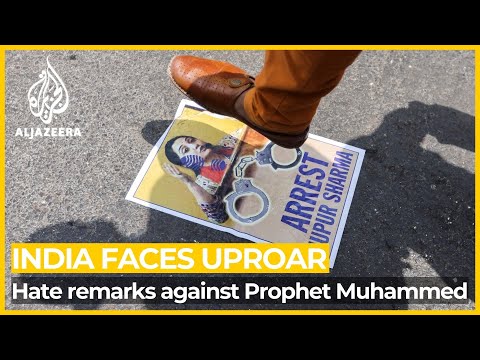