In the final of "Hip-hop 4", Zhang Yixing's team eliminated 4 people, and all members of Wang Y...

WANG YIBO ENGSUB 2021/11/21: In the final of "Hip-hop 4", Zhang Yixing's team eliminated 4 people, and all members of Wang Yibo's team were promoted. "This is Street Dance 4" finals, a total of 14 groups of dancers participated, The first round is a competition for position. Any dancer who enters the top eight in this round, Can become a member of the Street Dance Elite League, although there is a Battle in the second round, But as long as they are promoted in the first round, the trip is not in vain for the dancers. The grabbing competition is also a work competition, 14 groups of dancers perform their works in turn. After each performance, the on-site judges will vote. Finally, the ranking is based on the votes of the players, The top eight dancers advanced, and the rest were eliminated. Zhang Yixing team eliminated 4 people In the first round of the competition, Zhang Yixing's team had four groups of players on the field. GOGO BROTHERS bears the brunt and became a group of players in the finals. GOGO BROTHERS brought a dance performance "The Passing of the Fire", It implies the inheritance of street dance, in addition to inviting little dancers to perform on stage, The two brothers also invited their father Tony Gogo to the stage, Tony gogo is one of the founders of Lock Dance and the queen choreographer of Michael Jackson. The dance of the GOGO brothers means "inheritance". Because of the first appearance, Their votes were not high, and they ended up with only 115 votes. Also a Locking dancer, Ye Yin won 162 votes. The H&B group got 154 votes, their dance fields are the same, The stage presented is different, and the difference in scores can also be understood. But "Inheritance", which also has the theme of "Inheritance", However, 136 votes were obtained. It seems that the order of appearance affects the number of votes of the players. GOGO BROTHERS was eliminated because of its low vote ranking, Poppin C and Huang Xiao also went out one after another. At the end o

In the final of "Hip-hop 4", Zhang Yixing's team eliminated 4 people, and all members of Wang Y... 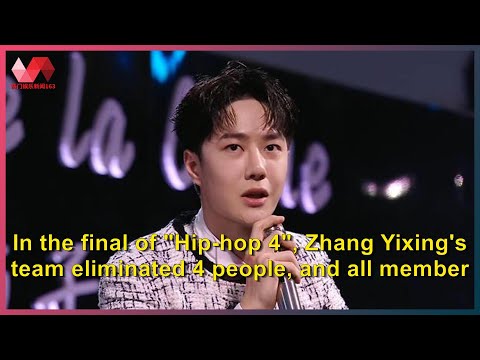