Today's video is about the Hillman Chrysler Avenger

IDRIVEACLASSIC is sponsored and insured by Adrian Flux - check them out for your insurance quote on the link below: https://www.adrianflux.co.uk/influencers/idriveaclassic/

BOOK YOURSELF INTO THE GREAT BRITISH CAR JOURNEY/DRIVE DADS CAR BY VISITING THE LINK:
https://greatbritishcarjourney.com

The Avenger was a car made by Rootes from 1970 until 1978 and just like the Imp, was produced under many different badged variants including the Chrysler Avenger from 1976, the Talbot Avenger and many more names like the Plymouth Cricket in the US and Canada. Although it must be mentioned the car was made in Argentina until 1990 and sold between 79 and 81 as the Talbot Avenger by PSA Peugeot Citroen.

The car was designed by a team overseen by Rootes styling group director Roy Axe, a name you might’ve heard before because he’s had a hand in all sorts of cars including the Sunbeam Rapier, Rover 800 and Rover 200/400 series. The initial idea behind the car was that it would be an upgrade for the Minx, the best seller in the line up.

However, in the background they were also working on the Hillman Hunter which was taking the majority of the resources and ended up replacing the Minx and Super Minx; however despite all this, the work on the Avenger continued.

The car was bigger than the Imp and therefore naturally fell into the middle of the range market for Rootes; which meant it came up against the Cortina. A little like that Imp we tested last week, there was a criteria for the designers which included the fact the car needed to be spacious, smart and speedy and meet the growing demands of buyers who had moved on from the early 60s when heaters and sun visors were optional extras.

It was now the era of car buyers having choice, demanding more for their money and expectations and standards being raised by the increasing dominance of Ford, a wider choice of purchasing options and of course, the quiet growing threat of the Japanese automotive opposition.

Rootes also started to consider a new growing market: the company car and with the new tech of computers being able to design body shells, Rootes had a great car design which was designed not with ego in mind, but with what the buying public wanted.

Another market Rootes started to take note of was the female buyer and with that, they drafted in female and fashion consultants to really think about what women wanted from a car; albeit it was mainly an aesthetics thing.

It wasn’t just the design which was forward thinking, Chrysler handed out a lot of investment and created new engines and for the South American market, an 1800cc variant. South African cars had a Peugeot engine fitted.

Looking at some of the cars launched in the late 60s, early 70s, it seems a surprise that after so much investment they didn’t push a little deeper and go for a five speed box, but instead the company played safe and went for a four speed manual box twinned with either a 1250cc or 1500cc engine.


In 1976, the car became a Chrysler whilst turbulence ensued with government backed rescue plans and changes to factories and with it, a facelift came to light and this gave the car a new font end and dash as we see in the car today, in addition to the update of the rear lights.

The trim levels which had been super and deluxe were replaced with LS and GL, with GLS sitting as the top spec.

The Avenger really came to a natural end as it became more a niche. Cars were now meant to be cars which appealed to Europe or the world, not just one country, and with the phasing out of the Avenger from 77/78, the car slowly died a death before being replaced by the Solara, which actually isn’t quite as cool as the Avenger, however basic it may be.

Overall, nearly three quarters of a million Avengers were sold before everything slowly came to an end and thankfully places like Drive Dad’s Car and the owner’s club are keeping these cars alive for future people to discover just how good they are compared to many cars of the era.

Now before we go for a drive ourselves, I thought I’d ask somebody else who’d booked a test drive what he thought of the experience here today. 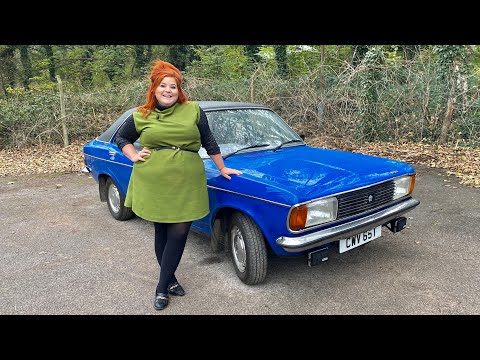 Today's video is about the Hillman Chrysler Avenger IDRIVEACLASSIC is sponsored and insured by Adrian Flux - check them out for your insurance quote o...