How Generation MZ in S. Korea view jobs and the workplace

Young South Koreans in the so-called 'Generation MZ'... are becoming a key driving force for the economy... but more and more of them are quitting their jobs.
Our Shin Ye-eun went out to... find out why.

"Generation MZ…a common term used in South Korea that combines millennials and those in Generation Z.
In other words…those born from the 1980s to 2010s.
Most are in their 20s and 30s...meaning they make up a big portion of the workforce.
But, many of them have reported to quit their jobs within a year."

According to a survey by recruitment portal site "Job Korea", more than 75 percent of those asked had experience of changing their full-time jobs.
Three out of 10 were found to have quit their jobs less than a year after starting them.
Most said that the excessive workload meant they didn't have enough free time.

“As an MZer myself, I gathered a few more young people from different backgrounds to ask one common question. What makes working so hard?”

One person I asked said having no life outside of work was what pushed her to quit.

"There was no time to invest in myself. I was like a machine. Getting up in the morning, going to work. I had lost my identity. That's why I don't regret quitting my job."

Instead, she has decided to pursue a Master's degree.
As of now, she hopes to concentrate on her studies.

Others who changed jobs said they couldn't stand feeling useless.

"It's important for me to be able to pitch my ideas freely and communicate even with the higher-ups."

"I decided to quit my job when I felt like I've tried everything. As soon as I felt unproductive and had learned everything from there, I left."

"I always wondered whether my work contributed to the company. Whether anyone would notice if I went missing for a day. Whenever I felt like my performance could be replaced or neglected, I had the urge of quitting."

He said this problem could partly stem from Korea's recruitment process.

"I think many, including myself, just apply to as many companies as possible to increase their chances of getting a job interview. After tweaking CV after CV to the taste of each company, I wondered if I even wanted to join that company in the first place."

Many in the room agreed, saying they too had applied for jobs... just so they didn't have any gaps on their resume.
They agreed, it's hard to find the "perfect" workplace.

"As a person who has launched a startup and recruited employees... I found job searching to be similar to dating. It's very difficult, even impossible to find your "perfect" match."

A psychology professor explained that what these people had mentioned...was a common trend found in MZers.

"Born into a digital era, MZers have access to so much information. They compare their situation with others. If someone on the internet looks happier at his or her workplace... MZers not only feel deprived but are intrigued to find out more about that place. That's why many frequently change jobs."

She added MZers have a distinctive trait.

"MZers prioritize themselves. They're very individualistic because they were born when the economy was booming and most households only had one or two children. From a young age their parents concentrated solely on them. Naturally, they grew up doing what they wanted. As adults, they now prioritize their quality of life over work."

This is different from the previous generation.

"As a member of Generation X, I feel very different from MZers. Our generation tends to not take action when it seems too risky or unfamiliar. But MZers are down for a challenge."

Companies have had no choice but to accommodate this trait.
A recruiting manager from a major company, who has asked to remain anonymous, explained this is because MZers make up a big portion of the workforce.
He said it costs companies a lot to educate new employees... who end up leaving on average... within three years.

"We asked MZers who wanted to quit so soon...WHY. They said they felt unproductive. The tasks assigned to them weren't interesting. So we decided to allow people to experience different tasks at different departments."

Other companies have decided to respond to MZers who demanded a good "work-life, balance."

"So we've implemented flex time and operated early off work during birthdays. And quarter off work so they can use their time and vacation freely."

"It’s a regular work day for me.
I'm writing a news article… but in front of me is a beautiful ocean view.
That’s because I’m on workcation…a combination of work and vacation."

During my workcation, I asked fellow MZers whether they appreciated this type of incentive ...

How Generation MZ in S. Korea view jobs and the workplace 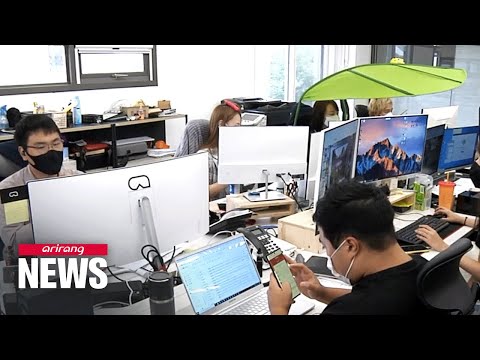