YARMOUTH – [HN NOTES & MULLINGS ON THE MATTER] – As an “Urban Wildlife Photographer” – or news photojournalist – same thing – I find the coyote one of the least threatening creatures I happen to encounter during the nighttime. I see them all the time, anywhere from the sandy sticks of Sandy Neck to running the downtown streets of Hyannis during the peaceful wee hours, well after our local drinking and drugging community have finally decided to chill out for the duration.

I personally enjoy watching coyotes. Love watching their wiles and their ways, their old and their young… and until one pulls a knife on me for no reason… or until one threatens to bash my head in with my camera, for example, I have absolutely no beef with them. “Get on with your furry bad selves!” That’s what I say.

But not everyone feels the same way about coyotes. There are individuals out there who enjoy killing them… or at least find it necessary for one reason or another. For some, it’s personal. For others, it’s the sacred duty of “the hunter” to cull the population, protecting the rest of us feeble coyote lovers from these “dangerous pests.”

Don’t get me wrong. I have nothing against hunters. I come from a long line of Canadian hunters. My people still hunt to this day… and they do it for food, not sport. A deer or moose goes a hell of a long ways towards feeding a poor family during the cold months. And it’s not unusual for my relatives to kill an extra deer or moose or bear for other less fortunate families in their community once their own freezers are full. Many of my kin, especially the older ones, have known lean times. And hunger is a great teacher. Wildlife shot with rifles is generally not their preferred meat – many of my relatives are (or were) fishermen by trade – but they’ve all learned to make very good use of all the animals they harvest, great or small, surf or turf.

Maybe I’m totally wrong but as much as rack my brain…. and considering what I’ve learned about urban coyotes over the years, I cannot think one single good reason to dress up like “real hunters” to go out and slaughter these animals – for, in my opinion, people who don’t hunt for necessary food or clothing or basic survival are not real hunters… and especially when the “hunting” is done so close to family neighborhoods on the Yarmouth/Dennis town line, as was the case last evening.

And is hunting the coyote even an effective way to control its numbers here on Cape Cod? I’ve always been told coyotes regulate their litter sizes to the amount of food available. If you gun down a large number of these creatures, won’t they simply have larger litters because of an increase in food – rabbits, mice, voles, raccoons and weasels?

Now I know those who enjoy killing coyotes may become somewhat apoplectic with rage by my words because they fly in the face of their “sport.” And I don’t blame them one bit… but I still don’t understand coyote hunting here on Cape Cod. And I don’t believe it’s necessary or effective. Never have. Probably never will…

… and as an Urban Wildlife Photographer who encounters a wide range of wily creatures during the overnight, coyotes are the very least of my worries. And that’s a fact, Jack 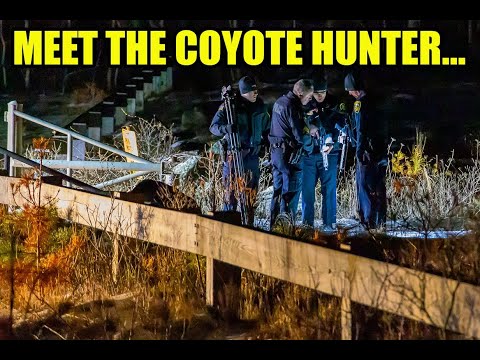