Ruth Negga spoke with us at SCAD: Savannah Film Festival to discuss her Netflix film, "Passing," co-starring Tessa Thompson. In an interview with SC's Reshma Gopaldas, she discusses racism and colorism in the movie and in her career.

For Ruth Negga, "Passing" is more than a movie about what it means to be mixed race. In the film, which premiered on Netflix on November 10, 2021, Negga stars as Clare Bellew, a mixed-race woman who “passes” as white and is married to a wealthy white man. The film follows Clare as she reunites with her childhood friend, Irene Redfield (Tessa Thompson), who’s also mixed-race but identities as Black and is married to a Black doctor.

Negga, who is half Ethiopian and half Irish, explained that her own mixed-race heritage informed her role in Passing. “When anyone takes on a project, they bring a lot of personal baggage and ideas. Being mixed race, mixed heritage in the entertainment industry, of course, I have stories and I’ve absorbed a lot by osmosis. They all inform, implicitly, explicitly,” Negga told STYLECASTER at SCAD Savannah Film Festival, where she accepted the Spotlight Award.

However, Negga believes that Passing—which is based Nella Larson’s 1929 book of the same title—is more than a story about two mixed-race women. “What interested me most of all are expressions of identity and who gets to choose what you are,” she said. “This idea that the freedom to be who we are is very much curtailed and contained by society. What degree is that limiting and what degree is that freeing? I’m not really sure. Our film very much interrogates that with a backdrop of passing, which is essentially leaving one community for another and hiding who you truly are.”

She continued, “In this case, the most obvious form was my character Clare leaves her community behind and she moves through the world as a white person now. Of course, that’s on the surface. When you dig deeper and you read the book and you watch our film, the character Irene says, ‘We’re all passing for something aren’t we?’ It’s an expression of our identities and the masks we wear and when we wear them and how we wear them and how much of that we internalize.” 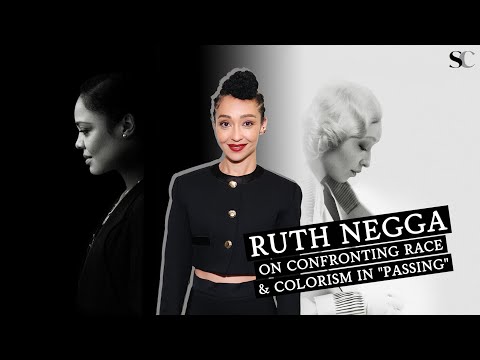 Ruth Negga spoke with us at SCAD: Savannah Film Festival to discuss her Netflix film, "Passing," co-starring Tessa Thompson. In an interview...