Can you build a $100 million company with no employees? Our guest has done it six times.

On this episode of the Making Bank podcast, Trevor Blake shares how he has built over $600 million worth of companies without any employees.

As a bullied child, Trevor got into reading and learning early on. From there, he learned many life lessons from the people before him. When he hit his 40s, he left his current company to start his own, putting those lessons into good use. Harnessing technology, systems and himself, he has built multiple $100 million companies without a single employee. He shares how he did it on this episode.

Trevor also delves into how set proper intentions, build quickly, and sell well. Listen to the show to hear more on how to harness your intuition, work five hour days, and the one big secret to success.

Trevor’s Background (2:00)
After being bullied in school, Trevor turned to books and biographies to learn. Eventually when he grew up. took to traveling with his wife, and learned physics. When he hit his 40s, he quit his job to start his own company, and since then has raised $600 million with seven companies and zero employees.

Zero Employees (5:17)
Trevor explains how he started his first company with $200 and grew it up to over $100 million. A large part of this is due to his business model, which relies on technology and himself to perform all functions. Without employees, his net profit is 76. He has since successfully repeated this process 7 times.

Real World Wizards (9:22)
Trevor delves into why he thinks entrepreneurs are really just real-world wizards. From converting ideas into institutes and money, any entrepreneur has the power to make magic happen with the right steps and intentions.

Setting Intentions (11:47)
Can you imagine success into happening? Drawing from his background, Trevor explains how by telling yourself that your success has already happened, you can trick your brain into heading into that direction. Instead of saying, “I will sell my company,” you can say “I have sold my company” and your brain will move towards that goal.

Trevor also delves into how entrepreneurs are fixers and creative people, maybe even more than analytical. He uses past examples of entrepreneurs who set out to solve a problem before finding success.

Get Big, Fast (17:08)
Trevor chats about how to think bigger and grow big quickly. By not taking employees and having success exit strategies, you can build a company and sell it in only a few years and make millions while doing it.

Trust Your Intuition to Exit Properly (19:57)
The best exit strategy is a solidly built company. Trevor shares his idea that the fast-paced world we’re living in lends itself well with those who have strong intuition and can adapt quickly, which traditionally has been women. Trevor urges the audience to embrace these traits and learn from the women in their lives.

Five Hour Days (23:23)
In studying brain neurology, Trevor has discovered that our minds can only be product for short periods at a time. Other successful entrepreneurs have adapted habits such as doing something creative or even short naps that have greatly improved productivity. Trevor explains what his day looks like and how much he gets done. 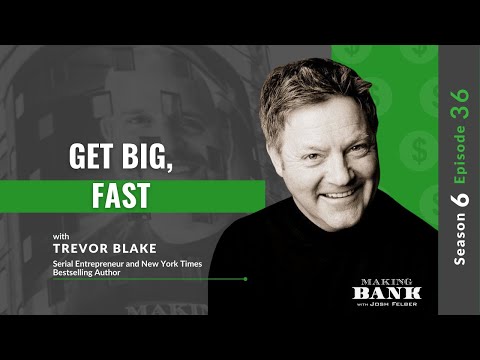 Can you build a $100 million company with no employees? Our guest has done it six times. On this episode of the Making Bank podcast, Trevor Blake shar...