We are back with another Geektown Radio podcast, and in this latest edition, I'm joined by Robert from Entertainment Talk to chat through our week in tv, film & gaming, along with all the weekly tv news, renewals and cancellations.

We begin by reviewing the last 7 days in tv, film and gaming. Robert chats about the little Monty Python inspired indie game 'The Procession To Calvary', which is available now on Steam, along with the state of MMO 'New Worlds' and its unfortunate ability to make some computers explode... We also both discuss the recent release of 'Medieval Dynasty' which has now come out of early access to full release. Meanwhile, I chat through tv series ‘Miracle Workers: Oregon Trail’, which is out now on Sky On Demand, and the very surprising finale of 'Billions'.

In the TV news, we run through the renewals, along with some cancellations and pickups, including discussing the Red Bee Media fiasco, which is still causing problems for various UK tv channels. We also chat about the launch of "Sky Glass", the new tv from Sky, the return of 'Doctor Who', a possible ‘WandaVision’ spin-off, 'Riverdale' witchy madness, and Netflix ordering a spin-off from 'That 70s Show'. 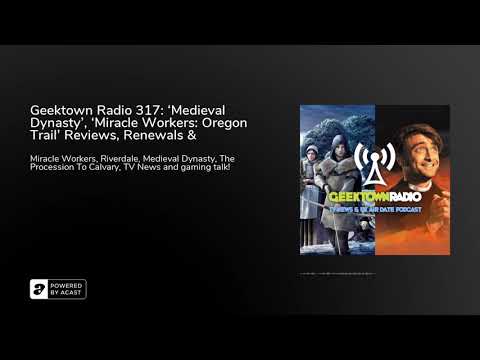 We are back with another Geektown Radio podcast, and in this latest edition, I'm joined by Robert from Entertainment Talk to chat through our week in ...