Funny Interview with an Australian Outside Pindi Cricket Stadium

Pakistan have struggled to attract visiting sides since a fatal terror attack on the visiting Sri Lanka team’s bus in 2009.
Australia pulled out of a tour five years earlier after a suicide blast at a Lahore church.

They last played in Pakistan in 1998, winning a three-Test series 1-0 and blanking the hosts in the three one-day internationals.

“They have landed,” a Pakistani security official said while Australia batsman Steve Smith posted a picture on Twitter saying the team had arrived.
Australia will play three Tests, three one-day internationals, and one Twenty20 match before leaving on April 6.

Having been forced to play their home games abroad – mainly in the United Arab Emirates – Pakistan appeared to have reassured international cricket authorities last year, with both New Zealand and England scheduled to tour.

But the Black Caps hastily departed in September just minutes before their first match was due to start, citing security fears. England postponed tours by their men’s and women’s teams soon after.

The decisions incensed Pakistan cricket authorities, who felt they had done everything possible to ensure safety and security.

They say they are again leaving nothing to chance, with nearly 4,000 police and military personnel guarding the team hotel in Islamabad and the cricket stadium in the nearby garrison city of Rawalpindi.

The Australian men's cricket team has landed in Pakistan for the all-format series, scheduled to start from March 4.

According to details, the Aussies reached Islamabad during the wee hours of Sunday morning via a special plane and were escorted to their hotel from the airport under tight security.

After spending a day in isolation, the Kangaroos will be able to train from Monday. Meanwhile, Australia's Test captain Pat Cummins will do an on-arrival virtual presser at 10.00 a.m.

It must be noted that the Australian squad is in Pakistan after a gap of 24 years. The last time they toured the country was back in 1998 under the leadership of Mark Taylor.

three Tests, three ODIs and a T20I from March 4 to April 5. Rawalpindi will host the Test series opener and white-ball leg while Karachi and Lahore will host the second and third Test respectively.

Funny Interview with an Australian Outside Pindi Cricket Stadium 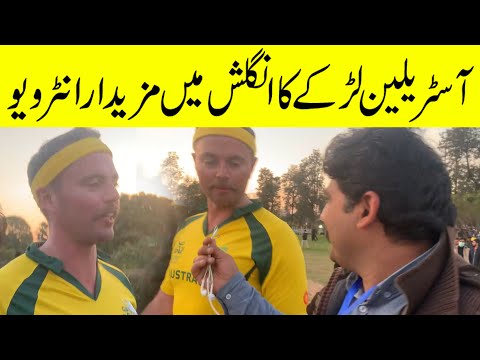