John Piowaty entered the United States Air Force on Flag Day, June 14, 1954 and served on active duty for twenty-seven and one half years with eight years enlisted service as a Survival Instructor at Stead AFB in Nevada and as a Personal Equipment Specialist in Air Rescue Squadrons in Japan. He was commissioned as a Distinguished Graduate of OCS in 1962, attended pilot training in Arizona, and became an instructor pilot at Laughlin AFB, Texas. He instructed in the T-37 and the T-41, and was as well an instructor in Military Science.
He received orders to the F-105 Thunderchief in October 1966, and following training at McConnell AFB with such notables as Larry Pickett, Sam Morgan, Jack Redmond, Bruce Holmes, and all the others sporting the 100 Mission Patch was stationed at Takhli Royal Thai Air Base, Thailand. From Takhli he flew 102 missions over North Vietnam, 46 of them in the deadly Route Pak VI. He was awarded the Distinguished Flying Cross with four oak leaf clusters, twelve Air Medals, and numerous other awards during his time in service. A Command Pilot, he amassed over 3,000 hours military flying time and nearly 6,000 surveillance flying hours over more than half a dozen countries worldwide.
Further assignments included a return to Laughlin, two years in the F-111 in England, attendance at the Air Force Staff College, and F-111s at Korat RTAB Thailand from where he flew the last fighter combat sortie in Southeast Asia over Koh Tang Cambodia in the Mayaguez affair. He instructed at the Staff College and served as an advisor to the Iranian Staff College until the revolution there.
His last assignments were as Operations Officer in Fighter Lead-In Training in the AT-38 and as commander of a large maintenance squadron at Holloman AFB NM.
In “retirement” he flew guns to the anti-communist rebels in Nicaragua in the C-123; electronic jamming and target tow missions in Lear Jets; over 500 Andes crossings in anti-drug support in Peru and Colombia in the C-123; and fourteen years for AirScan, Inc. in Infra-Red/Electro-Optical surveillance in the C-337 in Angola, Colombia, Kosovo, Bosnia, and finally in Iraq and was retired at age 75, only to be recalled at age 82 for a few months more specialized flying. 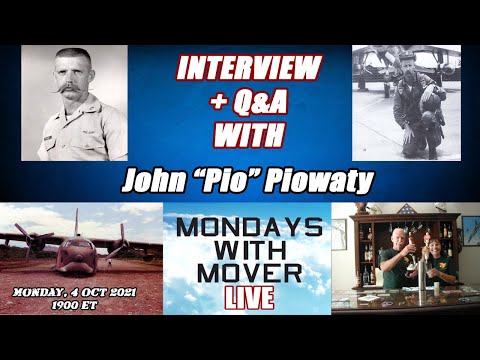 John Piowaty entered the United States Air Force on Flag Day, June 14, 1954 and served on active duty for twenty-seven and one half years with eight y...