Foo Fighters Taylor Hawkins Final Days As written by Rolling Stone and the controversy that ensued.

It’s a story we all knew that Rolling Stone or some other publication was probably going to write at some point. Whenever a famous rockstar dies it’s typical of the press to do a piece like this, but when Rolling Stone did a piece on Foo Fighters drummer Taylor Hawkins, the magazine received significant blowback. That’s what we’re going to discuss in today’s video.

In March of this year rock fans were shocked to learn that longtime Foo Fighters drummer Taylor Hawkins passed away while the band was on tour in Columbia at the age of 50. The coroner would reveal that drugs some legal/some prescription were found in the drummer’s system. Following the announcement of his death the band would cancel their remaining tour dates and return to America. Since the news of their drummer’s passing the band would stay pretty quiet on their future, undestandably so.

The Rolling Stone piece would claim the magazine interviewed up to 20 of the drummer’s close friends, while the drummer’s family, the band and their management refused to be interviewed for the story but refuted some of what his close friends told the magazine. .. The article would state and i quote Prior to Foo Fighters’ supersized post-pandemic comeback…Hawkins felt hesitant about returning to the road and wasn’t sure he’d be able to remain a full-time member if they continued to tour at this pace, these friends say. Even though he kept himself in decent shape, according to his friends, he felt vexed by the physicality required to play nearly three-hour concerts night after night. One of those interviewed by Rolling Stone was Pearl Jam drummer Matt Cameron who told the publication He had a heart-to-heart with Dave and, yeah, he told me that he ‘couldn’t fucking do it anymore’ — those were his words. I guess they did come to some understanding, but it just seems like the touring schedule got even crazier after that.“[A band like that] is a big machine [with] a lot of people on the payroll,”. “So you’ve got to really be cognizant of the business side of something when it’s that big and that has inherent pressure, just like any business.” Prior to joining foo fighters hawkins had played with sass jordan who still remained close with the drummer years later echoed a similar sentiment as did one friend who remained anonymous who claimed it took courage for the drummer to have a heart to heart with grohl about his feelings, taking almost a year to have that conversation. But the band’s management refuted all these points claiming there was never a heart to heart talk with Grohl and that Hawkins never expressed his reservations about touring so much.

Red Hot Chili Peppers drummer Chad Smith was also interviewed for the piece and told the magazine that in December of 2021 the drummer collapsed on the band’s plane resulting in the band cancelling a show in the middle east. Smith would tell Rolling Stone “He just said he was exhausted and collapsed, and they had to pump him full of IVs and stuff,” . “He was dehydrated and all kinds of stuff.” The band’s management claimed the drummer did not collapse as reported in the story.

The anonymous friend would claim that Hawkins was misled by the band’s management about how many live shows the group would do going forward and that he repeatedly complained to management, something they refuted in the story.

Not too long after the story was published both Chad Smith and Matt Cameron backed away from their comments in the story claiming they were misquoted and the article was oversentationalized.

Matt Cameron would take to social media writing When I agreed to take part in the Rolling Stone article about Taylor, I assumed it would be a celebration of his life and work,” Cameron wrote in a message shared on social media. “My quotes were taken out of context and shaped into a narrative I had never intended.
“Taylor was a dear friend, and a next level artist. I miss him. I have only the deepest love and respect for Taylor, Dave and the Foo Fighters families. I am truly sorry to have taken part in this interview, and I apologize that my participation may have caused harm to those for whom I have only the deepest respect and admiration.” 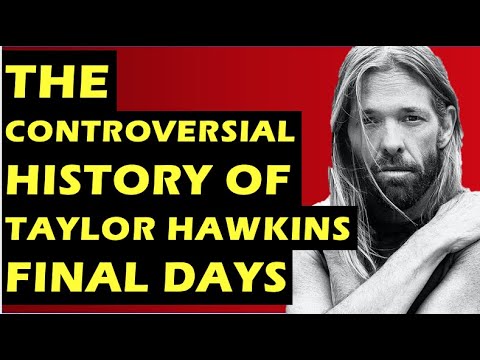 Foo Fighters Taylor Hawkins Final Days As written by Rolling Stone and the controversy that ensued. SIGN UP for 10 of the Craziest Stories in Rock N' ...