A Facebook whistleblower who brought internal documents detailing the company’s research to The Wall Street Journal and the U.S. Congress unmasked herself ahead of an interview she gave to “60 Minutes,” which aired Sunday night.

Frances Haugen, a former product manager on Facebook’s civic misinformation team, according to her website, revealed herself as the source behind a trove of leaked documents. On her personal website, she shared that during her time at the company, she “became increasingly alarmed by the choices the company makes prioritizing their own profits over public safety — putting people’s lives at risk. As a last resort and at great personal risk, Frances made the courageous act to blow the whistle on Facebook.”

Haugen previously worked as a product manager at Pinterest, Yelp and Google, according to her LinkedIn profile. She also lists herself as the technical co-founder behind the dating app Hinge, saying she took its precursor, Secret Agent Cupid, to market.

“I’ve seen a bunch of social networks and it was substantially worse at Facebook than anything I’d seen before,” Haugen told “60 Minutes.”

Jeff Horwitz, the Journal reporter who wrote the series of articles based on the leaked documents, also shared Haugen’s identity on Twitter on Sunday night, revealing her as the key source behind the stories.

The documents, first reported by the Journal, revealed that Facebook executives had been aware of negative impacts of its platforms on some young users, among other findings. For example, the Journal reported that one internal document found that of teens reporting suicidal thoughts, 6% of American users traced the urge to kill themselves to Instagram.

Facebook has since said that the Journal’s reporting cherry-picked data and that even headlines on its own internal presentations ignored potentially positive interpretations of the data, like that many users found positive impacts from engagement with their products.

“Every day our teams have to balance protecting the ability of billions of people to express themselves openly with the need to keep our platform a safe and positive place,” Facebook spokesperson Lena Pietsch said in a statement following Haugen’s identity reveal. “We continue to make significant improvements to tackle the spread of misinformation and harmful content. To suggest we encourage bad content and do nothing is just not true.”

“If we were a company who didn’t care about safety, if we were about trying to prioritize profit over safety, we wouldn’t do this kind of research,” Bickert said. “The whole point is understanding how we can be better and make a better experience.”

Haugen said she decided this year to make Facebook’s internal communications public, saying she realized she would need to do so “in a systemic way” and “get out enough that no one can question that this is real.”

Haugen in turn copied and released tens of thousands of pages of documents, “60 Minutes” reported. 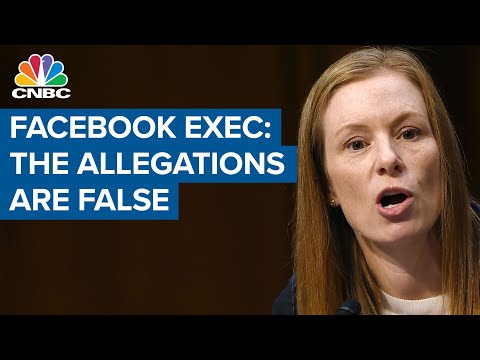