A Parallel World, in the Republic of Japan! The setting is a fictitious near future. The country's power balance has moved from Edo to Osaka, and it has been ten years since this new alternative MEIJI era has begun.
As new technological improvements in steam have led to the industrial revolution rapidly driving the times, dark clouds are seen looming over the horizon.
Mikoshi Michiru (Tsubasa Takizawa), a new special employee of the Jinjacho, receives a command from the Shogunate and heads for the train towards Osaka in search of the source of the problems.

The train transports itself into a different reality, and Mikoshi meets the gods(Enjin), who have been watching over Osaka since ancient times. However, the members Osaka Ryusei (Taiga Nakamoto), Hirome Tennoji(Kazuaki Yasue), Shiro Kyobashi (A.rik), and others ignore him. On the other hand, the other gods that do notice him, Tsuruhashi Yojiro (Nakabayashi Toi), Osakajyo Kouen(Hikari Inayoshi), Sakuranomiya Aoji (Hata Kengo), Tenma Kazuma (Yuki Itsuki), Taisho Masayoshi (Fumiya Kumazawa), and Shinimamiya Naoki (Okano Kaito) tease him.

Shinsengumi members Yasohachi Yamano (Kyo Yamada) and Aijiro Sasaki (Ryono Kusachi), lost, broken, and unsure what to do with their lives after surviving the purge, committed the crime of resurrecting Okita Soji (Mashima Shuto) from the land of the dead to overthrow the new Shogunate. Shinsaku Takasugi's (Miyazato Sol) sword rampages all over Osaka!

The wisdom of Shoin Yoshida (Yu Ando, Rikuto Omizu)! The inventions of Hiraga Gennai (Hyuga Nakatani)! Great men from history are both enemies and allies... The madness of Okita Soji puts Osaka at a standstill. Can Mikoshi Michiru save Osaka with the guardian gods of Enjin? ?? The time has come. Evil must be destroyed! 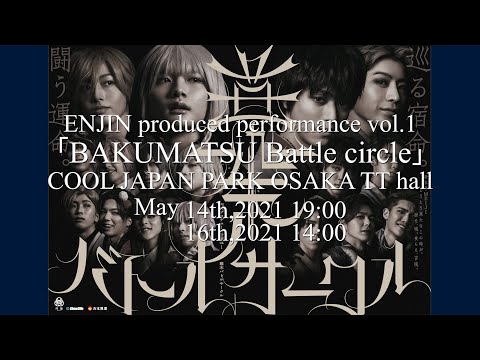 A Parallel World, in the Republic of Japan! The setting is a fictitious near future. The country's power balance has moved from Edo to Osaka, and it h...