admin
When individuals become employees, they take on both employment rights and responsibilities. Those obligations can be spelled out formally in a written employment contract or more likely in an employer handbook and policies disseminated to employees. Contracts formalize the employment relationship.

An employee’s contractual rights are based on a specific contract with an employer. For instance, a union and an employer negotiate a labor contract that specifies the terms, conditions, and rights that employees who are represented by the union have with the company. The contract also spells out the company’s rights and obligations.

Traditionally, executives and senior managers have negotiated individual employment contracts, but they are now becoming more common for highly specialized professional and technical employees who have scarce skills. An employment contract is a formal agreement that outlines the details of employment.

The rights and responsibilities of the employee may exist only as unwritten employer expectations about what is acceptable behavior or performance on the part of the employee. Some court decisions have held that if an employer hires someone for an indefinite period or promises job security, the employer has created an implied contract. An implied contract is an unwritten agreement created by the actions of the parties involved. Such promises establish employee expectations, especially if there has been a long-term business relationship.

The employment relationship is affected by both formal and informal agreements. The rights and responsibilities of the employee may be spelled out in a job description, an employment contract, HR policies, or a handbook, but often they are not. 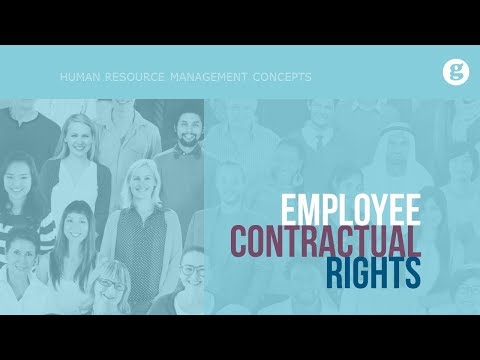 When individuals become employees, they take on both employment rights and responsibilities. Those obligations can be spelled out formally in a writte...