Elon Musk has sent out a memo to his Tesla employees, telling them that they are required to go back into the office for a minimum of 40 hours per week or else they are effectively "quitting" their jobs. He does make room for exceptions if this is not possible for some people, but apparently he's learned nothing from the working conditions of the pandemic and wants to be able to keep people in line by arbitrarily forcing them back into a building every day. Ring of Fire's Farron Cousins discusses this.

Elon Musk has sent a message to all of the Tesla employees out there telling them that you gotta get your butt back into that office building for at least a minimum. He says of 40 hours a week. That's the bare minimum. And if you don't show back up at the office, then we're gonna take that as you quitting your job. Now he does say he would personally review any cases where it is impossible for somebody to meet those standards. And if he deems it impossible, I guess he'll approve it. So you don't necessarily have to go back if you have, you know, all these circumstances that prevent it, but for everybody else, get your butts back in the building for at least again, a minimum he says of 40 hours per week. And I, I don't think anybody needs to be reminded that anything over 40 hours is overtime. So he is basically saying, you have to at least work until you're about to hit over time. That's the minimum.

So he wants people in a building. He wants them to at least work 40 hours a week, which of course is required 40 hours, nothing wrong with it saying a minimum of 40 hours. However, you know, that's a little iffy, right? But here's the thing. There's no reason in particular why all of these employees have to report back into that office building for eight hours a day. We've learned. I mean, God, if there's one thing we learned during the pandemic, it's that millions upon millions of Americans are more than capable and happy to work from home. I know some people miss the interactions that they get at the office. If those people want to go back, go back. If people have found that they're able to get a better work life balance, still doing all of their job, but finally able to get some stuff done around the house as well, spend more time with their families, let them do that.

They're going to be a happier employee. A happier employee is a better employee, right? I mean, that's not rocket science there, Elon, but you're arbitrarily forcing people back into these buildings because you and your company wanna have a better grip on them. That's all. This is folks that is all that this is about, is making sure that everybody is present and accounted for. So you can look over shoulders so that you can make sure everybody's on task. And so that you can maintain that tight vice-like grip over your employees. Because if you can't do that, then hell what's middle management for yeah, sure. You're wasting electricity. Going into the building. People are wasting gas having to drive there and back every single day. And you're running the air conditioners, running the heaters in the winter. So yeah, you are spending more money as a company and the employees are spending more money as an employee, but at least you get to monitor whether or not they're there every day. Now, if you had seen a noticeable

Decline in production during the pandemic, I could understand this to a degree, but you didn't. In fact, a lot of companies reported that when people started working from home, there was even more production than there had been when they were at the office for many industries across this country for many offices across this country, there was no physical reason for people to be inside of a centralized building. 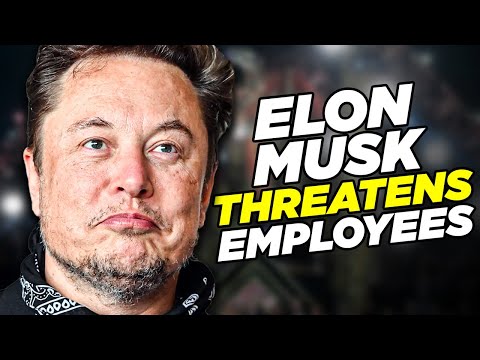 Elon Musk has sent out a memo to his Tesla employees, telling them that they are required to go back into the office for a minimum of 40 hours per wee...