EEOC Tips for Employees- The System is Rigged, but we CAN win!

This video looks at several ways the EEOC "deck" is stacked against employees, especially early-on in the process. But don't forget that what REALLY matters isn’t so whose back EEOC had in the beginning. EEOC started on NASA’s side, and ended up on mine. It’s whose back they have in the end. We want that to be YOU.

---- What do you guys think? What was your experience with EEOC like? Did you feel like they were treating you fairly? Tell me all about it in the comments.----

How IS the deck stacked & what can we do about it?

1. The LAW favors employers. Some employers are excluded from employment protections. Even employers who have to comply with the law start out "innocent" until we prove their guilt.

2. The EEOC process isn’t equal either. It's crazy complicated, and its many timelines seem designed to give EEOC & employers lots of leeway in managing claims. Employees don't have any slack. When we miss a deadline, our claim dies.

3. The written guidance and documents that are available to help us navigate the process all use legal language & concepts that also puts employees at a disadvantage.

Your chances of winning are better with an attorney, if you can find one that you can afford - which isn't always possible. If you can’t find an attorney, you’ll have to match legal wits with your employer, who probably has an attorney. It is possible to win pro se, but it’s not easy.

4. Besides the money it'll cost for an attorney, the federal sector essentially allows Agencies to investigate themselves, which seems ridiculous to me.

NASA paid the “EEOC counselor” and “EEOC investigator” on my claim. In my case, both seemed mostly impartial. And even if yours aren't, and your employer's investigation finds no discrimination, you can still request a formal hearing with an administrative judge (AJ) who actually works for EEOC.

Your Agency’s biased Report of Investigation will proceed you, so the AJ may come in with some biases about your claim... and most Agencies file a Motion for Summary Judgement, basically asking the judge to find in their favor WITHOUT a hearing, based on their report. Our response to that motion is our chance to present our side to an actual EEOC employee.

In spite of all the biases in the law & process, both my counselor & investigator saw exactly what I was complaining about, and they didn’t just turn a blind eye. They heard and documented my concerns.

I think a couple of things helped them listen:

1. MY attitude. All I wanted was to have my rights respected by my employer. I never allowed myself to take out my frustrations toward NASA on EEOC. They were there to do a job, so I tried to make it as simple and painless as possible for them. I expressed my concerns as firmly & professionally as I could. I demonstrated my good faith and an honest desire to work it out. Even when NASA requested a 30 day extension that I didn't want, I agreed, without making a fuss.

2. NASA’s attitude.
My boss refused to attend a meeting that the counselor tried to set up between us, which showed the counselor exactly what I was up against.

NASA kept that momentum going through the whole process. Delays. Contradictions. “Lost” evidence they should have preserved. Brought in witnesses that weren’t relevant (to assassinate my character and prop up their pretext). And even though I had given them a 30 day extension earlier, when I asked for a two-day extension on a deadline, to attend my mother-in-law’s funeral in another state, and NASA refused to bend at all.

All that made an impression at EEOC, and not a good one. The longer the process went on, the more I noticed EEOC was listening to me. The conclusions in my report of investigation were still slightly biased in NASA’s favor, possibly because NASA was allowed to redline those conclusions. However, the EVIDENCE that EEOC put into that report was VERY helpful to my case.

3. EEOC's Mission! Most of the people who work at EEOC believe in equal rights. A lot of them know first-hand how harmful discrimination can be.
I think most of them are also adept at recognizing games and pretext - on both sides. Don’t play games & call out your employer’s games with evidence. EEOC is likely to see what’s going on.

---- All opinions are my own. Not legal advice. I am not an expert. I am en employee who won my claim against NASA. While I do my best to be factual in my videos, viewers should assume that all observations or statements are ALLEGEDLY. These are things to consider, but do your own research, pilot your own vessel.

EEOC Tips for Employees- The System is Rigged, but we CAN win! 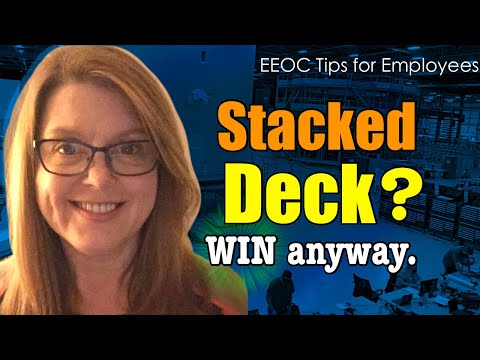 This video looks at several ways the EEOC "deck" is stacked against employees, especially early-on in the process. But don't forget that wha...