Ahead of Taiwan’s Doctor’s Day on Nov. 12, the Taipei Doctors Union held a press conference on Wednesday calling for labor rights protection for employed doctors. Under Taiwanese law only resident physicians, or postgraduate trainee doctors, are protected under labor law, leaving more than 90% of physicians without any labor rights protection. The activists called for the amendment of the Labor Standards Act to include employed doctors as employees, too.

Placard in hand, doctors’ union representatives and DPP lawmaker Hung Shen-han call for legal protections for employed physicians. Of all doctors in Taiwan, over 90% are contractors to whom the Labor Standards Act does not apply.

Chen Liang-fu
Taipei Doctors Union secretary-general
Even if the Labor Standards Act’s stipulation on working hours could not be applied to physicians, they should at least be protected by other legal standards. The more than 90% of people to whom the Labor Standards Act does not apply should be given some protection.

Compared to regular employees who are protected by labor law, many employed physicians often have to deal with arbitrary transfers and contract non-renewals. They face heavy penalties for breach of contract, and if they wish to terminate employment, they are often required to give three months’ notice. In one example given at the press conference, the Taipei Doctors Union revealed that one particular practitioner reported being slapped with a NT$1 million penalty after leaving the job. Only after a two-year litigation was the penalty lifted.

Liao Hui-fang
Lawyer
Even if a physician were employed, they would still not be given any employment or contract protection as stipulated in the Civil Code. In that case the employer could treat the physician as an independent contractor and thereby ridding the employer of any legal responsibility.

Hung Shen-han
DPP lawmaker
Doctors who are supposed to be in hospitals to give them all in treating and caring for patients, many of them are faced with problems regarding contract terms and employment terms, so they’re going in-and-out of courtrooms instead.

Currently only resident physicians in Taiwan, numbered at 4,000, are protected under the Labor Standards Act, representing fewer than 10% of all medical practitioners. The doctors’ union urged the government to amend either the Labor Standards Act or the Physicians Act accordingly, to recognize physicians’ employee status and thereby provide rightful protection to employed doctors. 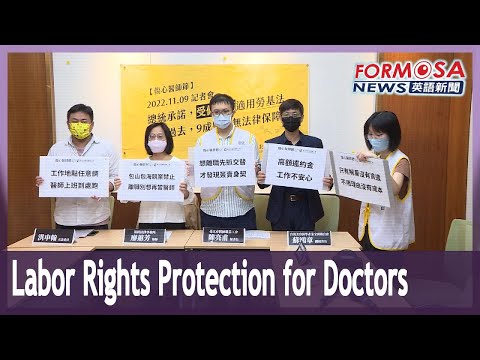 Ahead of Taiwan’s Doctor’s Day on Nov. 12, the Taipei Doctors Union held a press conference on Wednesday calling for labor rights protection for emplo...