Walt Disney Company CEO Bob Chapek is in the middle of a political firestorm over Disney's handling of recent LGBTQ+ and sexual instruction legislation in Florida that caused many Disney Cast Members, including Disney Parks employees in Orlando to speak out against the Disney CEO and the company for failing to condemn the bill that has now been passed. Disney CEO Bob Chapek originally addressed Disney Cast Members in a company email that left much to be desired, according the employees, and now, Cast Members of divisions across the Walt Disney Company are speaking out regarding lackluster support around diversity and inclusion.

Plus, Disneyland capacity seems like it is being hit all the time, but Disney officials claim Disneyland crowds are not anywhere near capacity level yet and they will not be bursting at the seams like they were in the past, due to the Disneyland Park Pass Reservation system. Also, news on when or if we will get the Quinjet attraction at Avengers Campus and so much more.

It's a Disneyland News update you don't want to miss!

It's The Kingdom Report.
Your home for Disney Parks news, reviews, experiences, and perspective.

Every Saturday join us for Kingdom Report Live, our panel news, trip planning and Q&A discussion show where Disney Parks are covered from coast to coast.

Join us EVERY SATURDAY at 3PM/ET 12PM/PT.
Streaming here and on @KingdomReportLive on Facebook.

Love Disney Parks?
Be sure to subscribe and never miss a moment of the magic.

BE A PART OF THE KINGDOM TEAM COMMUNITY! 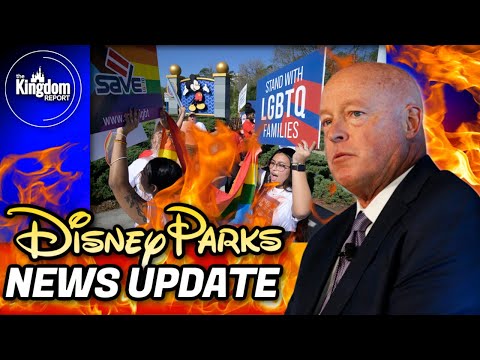 Walt Disney Company CEO Bob Chapek is in the middle of a political firestorm over Disney's handling of recent LGBTQ+ and sexual instruction legislatio...