Dishonest Sheriff's Deputy Gets 20 Felony Charges | Your Searching My House?

The case came to light in April 2020, when San Diego County Crime Stoppers received tips about a man who had engaged with a juvenile, according to Chula Vista police.

The case involved four victims between the ages of 12 and 14, but prosecutors contend that Fleer contacted more than 40 others who described themselves as minors. Investigators were unable to track those people down to verify whether they were underage.

Deputy District Attorney Jalyn Wang said Fleer sought out young girls, offered them money in order to coax them into meeting with him and encouraged the girls to arrange for their other young friends to meet him.

The prosecutor said the victims became afraid when they discovered they had been talking with a law enforcement officer. Fleer did not hide his profession and sent some of them pictures of himself in his uniform.
During the investigation, Fleer, who had been with the Sheriff’s Department for just over five years, was removed from a post at San Diego Central Jail and placed on desk duty, the agency reported. He had no on-duty contact with the public after being reassigned.

Fleer did not make a statement at his sentencing hearing. His attorney, David Shapiro, argued that Fleer should be sentenced to a term of just over nine years. In doing so, Shapiro asked the judge to take into account that Fleer had pleaded guilty early in the court process, sparing the victims from having to testify in court

He pleaded guilty to 18 Felony and 2 misdemeanor charges in June of 2021, and was sentenced 12 years in state prison

Want to see content that you won't see here? Become a Patreon today!

5-0 PATROL provides unbiased and authentic footage of incidents captured on body cams. We believe this footage can be used as an educational and informational guide for viewers to analyze and evaluate situations. The videos on this channel have been obtained through Public Records Requests.

We don't publish footage that has already been published elsewhere unless we have significant new footage and information to add.

drop us a line at the email below:

The featured content is NOT intended to be violent or glorify violence in any way. We are sharing the footage STRICTLY for the purposes of news reporting and educating.

Dishonest Sheriff's Deputy Gets 20 Felony Charges | Your Searching My House? 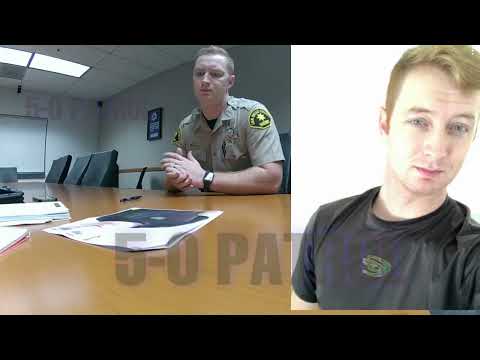 The case came to light in April 2020, when San Diego County Crime Stoppers received tips about a man who had engaged with a juvenile, according to Chu...