The U.S. Department of Education’s Office for Civil Rights has launched an investigation into the legality of state bans forbidding schools from imposing mask mandates on their students. OCR indicated two major bases for potential illegality: Section 504 of the Rehabilitation Act of 1973, and Title II of the Americans with Disabilities Act of 1990, which prohibit discrimination against students on the basis of a disability and guarantee students with disabilities access to a public education.

Opponents of the mask mandate bans argue that students with disabilities cannot access public education if other students and staff are not required to be masked. Proponents of the bans argue that parents should not be deprived of the right to make health decisions for their children. Other arguments concern the proper scope and limits on federal involvement in school matters.

As always, the Federalist Society takes no position on particular legal or public policy issues; all expressions of opinion are those of the speaker. 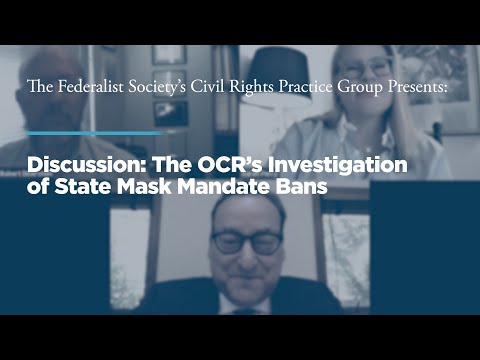 The U.S. Department of Education’s Office for Civil Rights has launched an investigation into the legality of state bans forbidding schools from impos...