Operations roles have been on the rise, including that of the Chief Operating Officer. The COO role is incredibly exciting but also complex. It differs vastly depending on the industry, company size and stage of the business, not to mention the strengths and weaknesses of their "other half", the CEO.

​At Operations Nation, our main goal is to help operations professionals to thrive at every stage of their operations career. Therefore we were incredibly excited to partner with Jeff Szczepanski, a seasoned COO and successful entrepreneur.

​Drawing from his unique experience, at this event Jeff is diving deeper into the following topics:

​Why a COO?
- ​Why do companies need COOs?
- Why the rise of this role over the last decade?

​Why not a COO?
- ​Do companies need COOs or...someone else?
- ​What's the difference between COO and other operations leadership roles?

​Currently a COO at Sphere, Jeff was previously Chief Operating Officer at Stack Exchange where he was responsible for running the business behind Stack Exchange’s network of Q&A communities, including Stack Overflow.

​Prior to Stack Exchange, Jeff was a Founder and CTO of Allworx Corp which reached a successful exit in 2007. And in the early days, he started his career as an engineer at Eastman Kodak and Xerox. 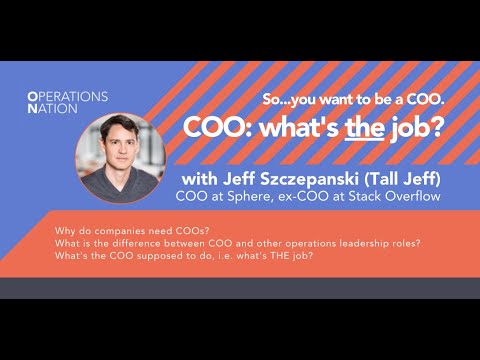 Operations roles have been on the rise, including that of the Chief Operating Officer. The COO role is incredibly exciting but also complex. It differ...