An exclusive in-depth conversation with Tony Award-winning director CHRISTOPHER ASHLEY as he pulls back the curtains and throws open the gates on DIANA: THE MUSICAL.

Set to open on Broadway on November 17, 2021, DIANA was developed by La Jolla Playhouse Artistic Director Ashley together with Joe DiPietro who wrote the book and lyrics, and David Bryan who wrote music and lyrics and was filmed in September 2020 at the Longacre Theatre without an audience, and with the original cast.  Jeanna de Waal stars as Diana, along with Roe Hartrampf as Charles, Erin Davie as Camilla, and Judy Kaye as Queen Elizabeth.  The filmed production is now streaming on Netflix in advance of the Broadway opening.

Almost 25 years since her tragic passing, Diana, former Princess of Wales, is as beloved as ever.  Her brief fairy tale life began when she was 19-year-old Diana Spencer who became wife to Charles, future king of England.  A shy kindergarten teacher, she found herself thrust onto the world stage, bound by tradition and protocol and trapped in a loveless marriage.  But Diana eventually found her voice and her freedom before being cut down in a media-spawned traffic accident in Paris.

DIANA: THE MUSICAL is a vibrant telling of her story with pop-infused music, witty and telling lyrics, dynamic choreography by Olivier Award winner Kelly Devine, iconic costuming, and soaring performances.  Lensed by cinematographer Declan Quinn and directed by Charles Ashley, DIANA: THE MUSICAL boasts stellar production values from both a cinematic and theatrical standpoint, delivering an immersive and engaging movie-going (and come November, theatre-going) experience.

CHRISTOPHER ASHLEY has served as La Jolla Playhouse’s Artistic Director since 2007 during which time he has helmed Playhouse productions of The Squirrels, Hollywood, The Darrell Hammond Project, His Girl Friday, Glengarry Glen Ross, A Dram of Drummhicit, A Midsummer Night’s Dream, Restoration and the musicals Diana, Escape to Margaritaville, Disney’s Freaky Friday, Chasing the Song, Xanadu, Memphis, which won four 2010 Tony Awards including Best Musical, and Come From Away, for which he won the 2017 Tony Award for Best Director of a Musical.

I spoke at length with CHRISTOPHER ASHLEY about this production of DIANA: THE MUSICAL from both a theatrical stage perspective and cinematic lensing, discussing the music and lyrics as they relate to Diana's story, William Ivey Long's exquisite and telling costuming (with no velcro or snaps!), choreography, set design and staging, lighting design, working with cinematographer Declan Quinn to capture the theatrical experience while making it cinematic, the editing by Gary Levy and Kate Sanford and the challenge of crafting a seamless feel while not losing any periphery on the stage, and more. 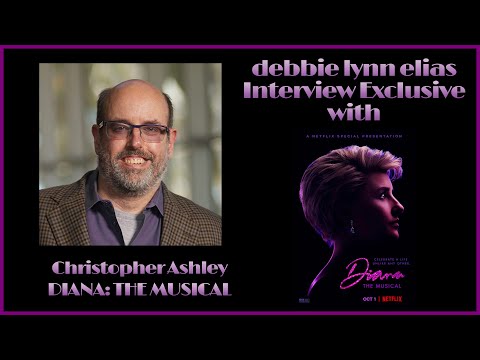 An exclusive in-depth conversation with Tony Award-winning director CHRISTOPHER ASHLEY as he pulls back the curtains and throws open the gates on DIAN...