Chris Smalls On How We Can SHUT DOWN Corporate Greed

"Unions are cool again": A new generation of workers advocates for unionization - https://www.cbsnews.com/news/unions-are-cool-again-a-new-generation-of-workers-advocates-for-unionization/?ftag=CNM-00-10aab8c&linkId=178073280

"The number of Americans who belong to labor unions had been dropping for decades. But suddenly, in the last year or so, the winds have changed. Unionization efforts are underway at tech companies like Apple and Google; media organizations like The New York Times and Condé Nast; and among grad students, delivery drivers and baristas.

Since December, when a Starbucks in Buffalo was the first to vote to unionize, workers at more than 200 Starbucks stores have followed suit. (Yes, they vote one store at a time.) One Starbucks picketer in Denver said, "We've had a lot of intimidation and a lot of efforts to stop us. But we're here!"

And then, last April, there was news that stunned the business world, about America's second-largest employer: JFK8, a massive Amazon warehouse on Staten Island that employs 8,300 people, voted to unionize."

Help build the Home of the Progressives http://tyt.com/JOIN

Chris Smalls On How We Can SHUT DOWN Corporate Greed 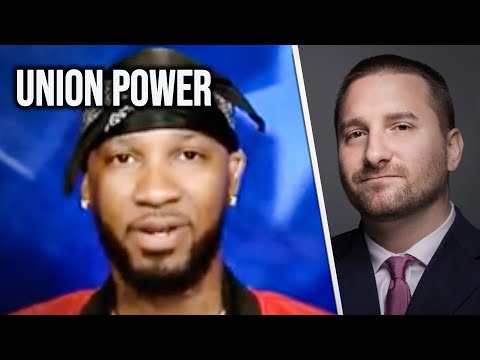 Amazon unions are growing across the nation despite the company's efforts to union bust and fight against the workers' rights movement. Amazon Labor U...