In today’s episode, Simon and I review the Canon P - a beautiful, well-designed 35mm rangefinder with a Leica M39 screw mount and an unusual 1:1 viewfinder magnification. The camera was built between December 1958 and May 1961 and came mostly in silver but also in black. Original black paint versions are quite rare and expensive today, the silver version is more widely available and comparatively cheap.

At the time, it was marketed as a less expensive, simplified alternative to the Canon VI-L, with the P standing for “Populaire”. The Canon P came with either a 50 mm f/1.4 or f/2.8 lens. According to the Canon Museum, the original retail price of the 50mm f/1.4 kit was ¥52,700 or ¥37,700 for the f/2.8 kit. The high-end version cost approximately $146 at the time which would translate to around $1.460 today and the low end version cost $105 which would be around $1.050 today. The lower price was made possible by simplifying the viewfinder to support only one magnification and show all three frame lines for 35mm, 50mm and 100mm at the same time.

According to Peter Dechert's (1985) "Canon Rangefinder Cameras", about 87,875 Canon P's were made. The Canon P is the predecessor to the famous and very successful Canon 7 rangefinder.

Simon and I took the Canon P out to Lindau which sits in between Germany, Austria and Switzerland with the beautiful scenery of Lake Constanze in the background. We took a photo walk on the Lindau island shooting one roll of Kodak ProImage 100 and one roll of Kodak Portra 160. Let’s get started. 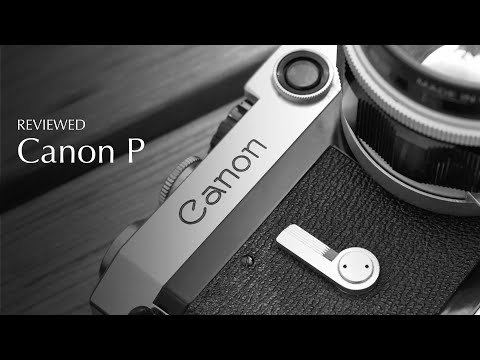 In today’s episode, Simon and I review the Canon P - a beautiful, well-designed 35mm rangefinder with a Leica M39 screw mount and an unusual 1:1 viewf...