On October 6, 2020 Sir Roger Penrose was recognized with a half-share of the 2020 Nobel Prize in physics. This marked a capstone in a storied career. On August 8, 2021 he turned 90, and to celebrate the world threw him a big party. I was one of the invited speakers to discuss his titanic contributions to cosmology. Of course, I brought him a gift...but it ISN"T what you might think! I couldn't resist throwing a bit of shade at the man who revealed the most mystifying aspects of black holes and the singularities that dwell within them.

I wanted to take a critical look at his beloved Conformal Cyclic Cosmology and see it for all it is, warts and all, virtues and vices complete. This is part two of my exploration of CCC: how can we prove Sir Roger WRONG, i.e. falsify its claims, not prove it right! This video explores the tools and technology that could push Roger's CCC to the limit!

Check out part 1 where I discuss the theory and its predictions: https://youtu.be/kysMgGGC7y4

It was a fantastic week of online sessions celebrating Roger's 90th Birthday and Nobel Prize sponsored by The University of Arizona's Center for Consciousness Studies. Fellow invited speakers included

Get my book, featuring my interview with Roger: https://amzn.to/2UPTxOI 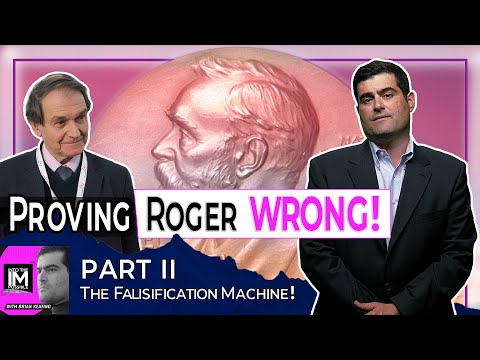 On October 6, 2020 Sir Roger Penrose was recognized with a half-share of the 2020 Nobel Prize in physics. This marked a capstone in a storied career. ...