Department of Transportation Secretary Pete Buttigieg is one of the most visible and compelling members of the Biden administration.

After his confirmation last year, Buttigieg became the first openly gay, Senate-confirmed Cabinet secretary in U.S. history, the youngest member of Biden's Cabinet, and the youngest person to ever serve as transportation secretary. In that role, he championed the passage of the Infrastructure Investment and Jobs Act, the $1.2 trillion law that will make major investments throughout the country on roads, bridges, railways, and broadband, the most significant bipartisan bill to pass this Congress.

Buttigieg was previously the Mayor of South Bend, IN and has spent a lot of time in Chicago. He is a former member of the U.S. Navy Reserve who was deployed to Afghanistan. He and his husband Chasten adopted fraternal twins in September. His political path, which included a notably strong performance in the 2020 Democratic presidential primary, was the subject of a documentary released in November.

Join us as the IOP hosts Secretary Buttigieg for a student-led discussion about politics, government, service, and family. 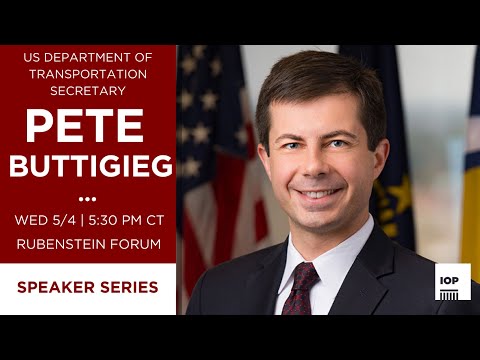 Department of Transportation Secretary Pete Buttigieg is one of the most visible and compelling members of the Biden administration. After his confirm...