As tornadoes ravaged the southern midwest, employees at a Mayfield Consumer Products candle factory in Mayfield, Kentucky pleaded with supervisors to let them leave the factory and take shelter at home. However, managers told employees that if they left they would be fired. The building was eventually leveled by the tornado, killing at least eight workers.
Cenk Uygur and Ana Kasparian discuss on The Young Turks. Watch LIVE weekdays 6-8 pm ET. http://youtube.com/theyoungturks/live

“As a catastrophic tornado approached this city Friday, employees of a candle factory — which would later be destroyed — heard the warning sirens and wanted to leave the building. But at least five workers said supervisors warned employees that they would be fired if they left their shifts early.

For hours, as word of the coming storm spread, as many as 15 workers beseeched managers to let them take shelter at their own homes, only to have their requests rebuffed, the workers said.

Fearing for their safety, some left during their shifts regardless of the repercussions." 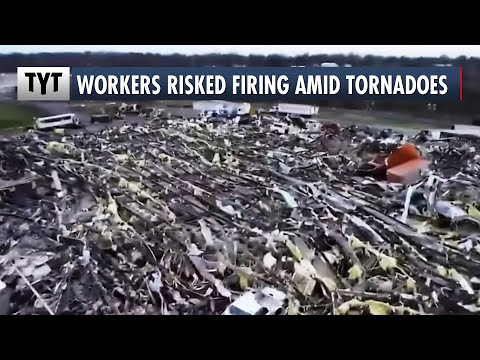 As tornadoes ravaged the southern midwest, employees at a Mayfield Consumer Products candle factory in Mayfield, Kentucky pleaded with supervisors to ...