BOOK OF BOBA FETT Official Trailer Breakdown | Easter Eggs Explained & Things You Missed | STAR WARS. We breakdown, give our reaction and explain the new Disney Plus Star Wars Teaser for The Book Of Boba which will follow Boba Fett and Fennec Shand after the events of Return Of The Jedi and The Mandalorian.

Ok so the Mandalorian Season 2 sort of filled us in on exactly what happened after Boba Fett got up close and personal with the Sarlaac. After escaping the 1000 years of digestation that he would've been subjected to Fett remained on Tattooine.

His armour was taken by Cobb Vanth, Vanth Refrigiration and after it got handed over to Mando Fett ended up partnering up with Fennec Shand to help him stop Moff Gideons forces.

Episode 8 of Season 2 ended with Fett returning to Jabba's Palace and after killing Bib Fortuna he took over the throne with Shand by his side. It takes two to Jango and it was an awesome way to end the season.

Now in the Bad Batch we learned that much in the same way that Boba was the Alpha clone of Fett that his sister Omega was well...the Omega. She was the first clone to be assigned a different gender and it is possible that she will be showing up in the series as she will be the same age as Fett is.

Now all of the titles for the episodes were leaked earlier in the year and much like The Mandalorian they will be divided up into Chapters. Interestingly, Book Of Boba will apparently start at Chapter 17 which means that it's a direct continuation of The Mandalorian. The Episode titles are called: The Champion, The Assassin, The Syndicate, The Battleground, The Homeworld, The Warlord, The Showdown and The Hunter. So by the sounds of it Fett will basically coming across different characters every episode similar to the set up of The Mandalorian.

Now we start off with the cavernous rocks outside of Jabba's palace and we see the B'omarr order which is a spider like droid that could be spotted in Return Of the Jedi.

These originally were a group known as the Bomarr monks who believed that in order to achieve enlightenment that they had to transform themselves into something that would completely isolate their minds. They had their brains put into jars and used these spider like droids to move around.

We then hear Fett state that he's not a bounty hunter and this is questioned by a voice over who says that he has heard otherwise. The voice states that he knows he sits on the trhone of his former employer and this is clearly a reference to him taking Jabba. 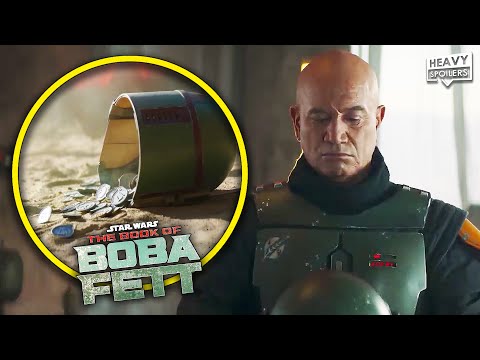 BOOK OF BOBA FETT Official Trailer Breakdown | Easter Eggs Explained & Things You Missed | STAR WARS. We breakdown, give our reaction and explain the ...