Movie Synopsis
In Black Friday Subliminal, an action packed suspense thriller from Robin Troja Films and the subconscious of Chauncey D. Henry, Esq., when an African-American NYPD officer adopts a fallacious disregard of the conspicuous, he becomes consumed by more than meets the eye.

Following the passing of his mother, NYPD cop Daniel Hart, Jr. (Adrian Sterling) and his father Mr. Hart, Sr. (Jeffrey T. Williams) are brought together for Thanksgiving Dinner by his wife Carole (Heidi Danae Crane) for the first time since his mothers passing.

Attempts made by the family to alter Jr.’s obstinate viewpoint of an affliction he has lived with and ignored, are followed by a chain of escalating revelations in reality and beneath the surface. Faced with a brutal reality and unbeatable odds, Jr. must embark upon an internal journey with the assistance of elements he would have least expected, in hopes to triumph over a deadly and debilitating condition and survive Black Friday Subliminal. 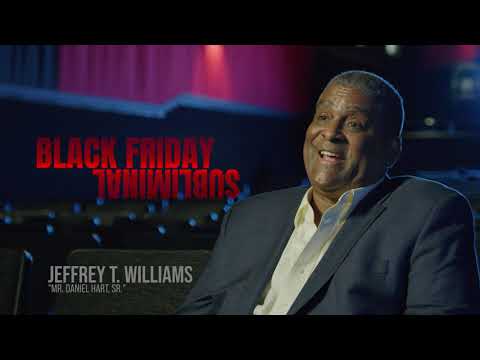 Black Friday Subliminal (2021) Jeffrey T. Williams talks about his experience making the movie... Text BLACKFRIDAY to 22999 from your mobile device to...