BIZZARE STORY OF HOW DIANA CHEPKEMOI GOT ENSLAVED IN SAUDI ARABIA

Kenyans have expressed their disappointment in the government after photos of a university student, Diana Chepkemoi, being held against her will in Saudi Arabia went viral.

The majority of those who were touched by her plight want the government and the Embassy of Kenya in Riyadh to intervene and have Diana Chepkemoi released from the employer's home and then repatriate her.

Diana Chepkemoi reportedly secured the domestic work to save her family from financial constraints. She was first motivated by the desire to complete her studies, reportedly at Meru University and wanted to save some funds for her school fees.

Her mother also fell ill forcing Diana Chepkemoi to find an agency that would facilitate her travel and find her work in Saudi Arabia.
"She is unwell but still being forced to work. We need your help Kenya to bring her back home. The embassy has been informed and has been given her location and employers phone number," activist Mutemi Wa Kiama stated.

We spoke to her agent, Susan Makungu who runs an agency dubbed Makungu International, after Chepekemoi's family blamed her for her woes.

Makungu who facilitated Diana Chepkemoi to travel to Riyadh, confirmed that she had tried to bring her back home but was facing stiff resistance from the employer.

The agent lamented that she had gotten in touch with the Kenyan Embassy in Saudi Arabia and her counterparts in Riyadh who even involved the police but Diana Chepkemoi was not granted her freedom.

She added that the university student was sick and had not received proper medical treatment.

"Our team from the other side got in touch with the police who went to the house but they could not even get access to the employer. Even the police in the country are afraid of the family.
"We are being told that the family is well connected and influential people. When I last spoke to Diana she told me that they were four househelps and this shows that the family is bigger and wealthy and has connections thus complicating this case," Makungu disclosed.

She added that she was willing to purchase Diana Chepkemoi's flight ticket once she is released.

BIZZARE STORY OF HOW DIANA CHEPKEMOI GOT ENSLAVED IN SAUDI ARABIA 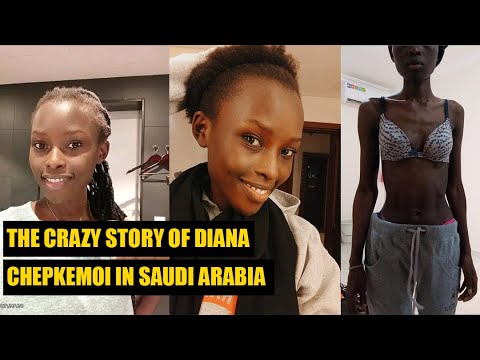 Full Story Of Kenyan Student Diana Chepkemoi Detained in Saudi Arabia Kenyans have expressed their disappointment in the government after photos of a ...