BB: You know, we had our chances. Just could have done a couple things a little bit better. It would have – I don't know if it would have changed the outcome, but we just – we just fell a little bit short. I thought our team really prepared well this week, and that's what we've got to do every week and coach a little bit better and make a few more plays and start winning these close games.

Q: You coached Tom Brady for 20 years, but this is the first time you went against him in a game. What was the experience like going –
BB: Look we went against Tom Brady every day, every day in practice defensively. So it's not like we've ever seen Tom Brady before.

Q: Was the experience of coaching against him in a game any different?
BB: They are a good football team and he's a great quarterback, and I think that's all – goes without saying.

Q: Your thoughts on Mac Jones today showing a lot of poise as a rookie back there. What are your thoughts on his performance today?
BB: We're going to look at the film. Again I thought our team played competitively, and Mac is certainly a part of that. You know, we can all play better and all learn from, you know, some of the things we could have done better but Mac fought hard and made a lot of plays for us.

Q: How do you plan to address your fumble issues? It looks like you have a lot this season and today was a critical situation, too.
BB: Yeah, nothing more important than ball security.

Q: Anything stand out about the running game tonight from you guys? Was it just, you know, Tampa Bay executing?
BB: We couldn't get much going there. They are obviously a good run defense but we couldn't – we couldn't get much done there. That was disappointing. We have good backs but we haven't been able to really get them started very often. So it's definitely something we need to work on and do better.

Q: Specifically about Mac, just being able to lead comebacks within the game, is that a learned skill? Is that something he can take coming out of this game? And I did want to ask you what you were told about the Matthew Slater play and if you've ever seen Matthew that upset with a call.
BB: Yeah, that's a tough call. You have to talk to the guys that made it. There's a couple tough calls there but you know, talk to them about that. I mean, look, Matt's a good – a good player, he knows how to compete. He knows how to win. He can learn things tonight like we all can. You know.

Q: I may have missed it, I just got in here, but what did you see – you've seen Tom Brady play so many games over so long. This game with all the emotions and obviously the chess match against you, what did you see from Tom tonight that may have kept it as competitive as it was?
BB: Yeah, I think we already covered that. That was one of the first questions.

Q: Was there any consideration of going for it on fourth down when you kicked the field goal at the end?
BB: I mean, not really.

Q: What were some of the things you guys did to maybe try to keep the Bucs guessing offensively in terms of the number of rushers that you decided to bring at different points?
BB: What did we try? I don't understand the question. 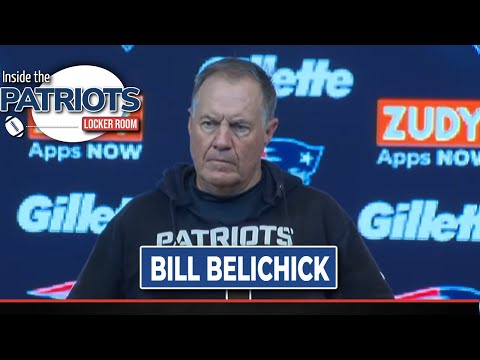