The United States of America went from being energy independent to energy dependent in a mere 18 months. Now, the President has just ordered the release of United States oil reserves – 1 million barrels of oil per day to be exact – spread out over the next 6 months. But does this actually provide any relief to American families?

"First, we should note that the United States energy consumption in 2021 was almost 20 million barrels per day. Hence, Biden’s decision to tap into our strategic energy reserve only amounts to 5% of our daily consumption and that is only for 6 months. Second, as a result of market disruptions, gasoline and diesel prices have been significantly increasing since the onset of the war in Ukraine. On March 6th the price of regular gasoline soared over $4 dollars per gallon and on March 10th, the average price of diesel inflated to over $5 dollars per gallon. . . . So now the American people are paying the highest petroleum energy prices ever recorded. In addition to that, we should note that the U.S. energy price amount is close to the Biden Administration goal. So, it’s important to keep in mind that the Biden Administration has always had the goal of raising petroleum prices in order to shift consumption to alternative sources of energy. The problem of course is that there are virtually no alternative sources of energy."

From day one, the Biden Administration’s goal was to shift consumption to alternative sources of energy. ACLJ Director of Government Affairs Thann Bennett explained how we saw this coming:

"How many times have we said this? Elections and policy choices have consequences. I think I would start by just reminding people what candidate Joe Biden said . . . he said I guarantee you we are going to end fossil fuel and I am not going to cooperate with them. It’s not like we got here by accident. . . . This was a policy path that this candidate and now this President wanted. He got lots of warnings from us and other people that if this was the tactic that he was going to take, that the American people were going to pay the price, literally at the pump and in lots of other ways as well. On day one, he started implementing this plan when he shut off the Keystone pipeline, when he blocked exploration in ANWR, and a number of other things. . . . This was not an accident. This was an intentional policy choice that this Administration made."

The Biden Administration absolutely created this problem and now they are attempting to put a Band-Aid on it because midterm elections are approaching.

Today’s full Sekulow broadcast is complete with even more in-depth analysis of President Biden’s releasing of oil reserves and our new brief against the Biden Administration’s mandate barring states from lowering their own taxes. 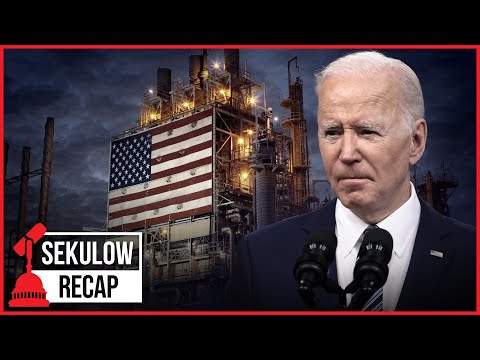 The United States of America went from being energy independent to energy dependent in a mere 18 months. Now, the President has just ordered the relea...