Here's the first breakdown of BETTER CALL SAUL Season 6 Episode 5 talking about my review on the fifth episode of Season 6! Where Jimmy & Saul appear.

Better Call Saul is an American crime drama television series created by Vince Gilligan and Peter Gould. It is a spin-off, prequel, and a sequel to Gilligan's previous series, Breaking Bad. Set primarily in the early to middle part of the 2000s in Albuquerque, New Mexico, the series develops Jimmy McGill (Bob Odenkirk), an earnest lawyer and former con artist, into an egocentric criminal defence attorney known as Saul Goodman. Also shown is the moral decline of retired police officer Mike Ehrmantraut (Jonathan Banks), who becomes closely affiliated with the Juarez drug cartel to support his granddaughter and her widowed mother. Jimmy and Mike's interactions remain sporadic until their respective storylines fully converge. The upcoming sixth and final season of the AMC television series Better Call Saul is set to premiere on April 18, 2022, in the United States, and will consist of 13 episodes split into two parts. The second half of the season will premiere on July 11, 2022. The season will also be streamed on AMC+ in the U.S. and on Netflix internationally. Better Call Saul is a spin-off prequel of Breaking Bad created by Vince Gilligan and Peter Gould. Bob Odenkirk (Jimmy McGill / Saul Goodman), Jonathan Banks (Mike Ehrmantraut), Rhea Seehorn (Kim Wexler), Patrick Fabian (Howard Hamlin), Michael Mando (Nacho Varga), Tony Dalton (Lalo Salamanca), and Giancarlo Esposito (Gus Fring) will reprise their roles from previous seasons. It has been confirmed that Brian Cranston and Aaron paul's Walter White and Jessie Pinkman will also return in the final season of Better Call Saul.

Find your entertainment escape at Beyond Premiere!

Our goal is to create an environment that helps you find your entertainment escape through recaps, reviews, news articles and giveaways. Beyond Premiere is the go-to Youtube channel for movie and tv show recaps, breakdowns, reviews and more.

If you're looking for a comprehensive understanding of your favorite films and shows, Beyond Premiere is the perfect resource.

Whether you're a casual fan or a hardcore devotee, Beyond Premiere has something for you.

Check out our channel!

// COPYRIGHT //
This falls under fair use Copyright Disclaimer under section 107 of the Copyright Act of 1976, allowance is made for “fair use” for purposes such as criticism, comment, news reporting, teaching, scholarship, education and research. 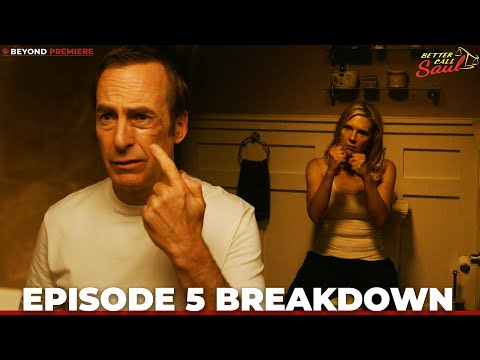 Here's the first breakdown of BETTER CALL SAUL Season 6 Episode 5 talking about my review on the fifth episode of Season 6! Where Jimmy & Saul appear....