Union Home Minister Amit Shah on Friday took stock of the security situation in Jammu and Kashmir in the wake of a series of targeted killings in the Valley, officials said. National Security Advisor (NSA) Ajit Doval, Army Chief General Manoj Pande, and Lieutenant Governor of Jammu and Kashmir Manoj Sinha were among those who attended the meeting.The home minister reviewed the security situation in Jammu and Kashmir, a ministry official said. Security arrangements for the upcoming Amarnath Yatra also figured in the meetings, the official said.The meeting came after terrorists carried out a series of targeted killings in the Kashmir Valley that include non-Muslims, security personnel, an artist and local civilians.Two persons — a bank employee and a brick kiln labourer — were killed in Kashmir on Thursday while another labourer was injured in two separate incidents.The bank manager was the ninth and the labourer was the 10th targeted killing in Kashmir since May 1. A woman teacher hailing from the Samba district of the Jammu region was shot dead by terrorists at a school in south Kashmir's Kulgam district on Tuesday.On May 18, terrorists had entered a wine shop at Baramulla in North Kashmir and threw a grenade, killing one person from the Jammu region and injuring three others.Policeman Saifullah Qadri was shot dead outside his residence in Srinagar on May 24 while television artiste Amreen Bhat was gunned down in Budgam two days later.Scores of Kashmiri Pandits, who were employed under a prime minister's package in 2012, have been staging protests threatening mass exodus since the killing of Rahul Bhat, who was shot dead by terrorists on May 12 in the Chadoora area of Budgam district in central Kashmir.
The high-level meeting chaired by Shah was the second such exercise in less than a fortnight.
Union Home Secretary Ajay Kumar Bhalla, Director of Intelligence Bureau Arvind Kumar, Director General of Central Reserve Police Force Kuldiep Singh, Border Security Force chief Pankaj Singh, and Jammu and Kashmir Director General of Police Dilbag Singh among other key officials took part in the meeting.Earlier, Shah had an informal meeting with LG Manoj Sinha, Arvind Kumar, Secretary of RAW Samant Goel and DGP of Jammu and Kashmir Dilbagh Singh. 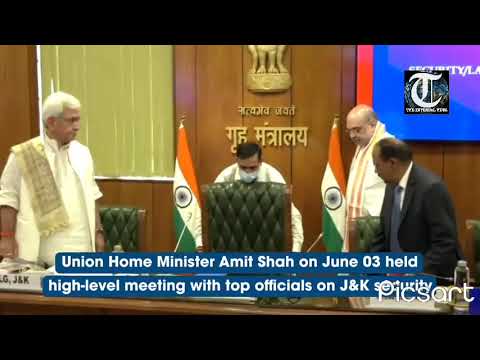