On Tuesday, October 5, 2021 the Center for the Study of Gender and Sexuality and Global Studies presented a book salon discussion of "Western Privilege: Work, Intimacy, and Postcolonial Hierarchies in Dubai." This discussion featured author Amélie Le Renard (Researcher at the National Center for Scientific Research, Centre Maurice Halbwachs, Paris & Visiting Scholar at the Center for the Study of Gender and Sexuality, University of Chicago) in conversation with Rhacel Salazar Parreñas (Professor of Sociology and Gender Studies, University of Southern California). Parreñas is the author of most recently Servants of Globalization: Migration and Domestic Work (Stanford UP, 2015). The conversation was moderated by Kimberly Kay Hoang (Associate Professor of Sociology and Faculty Director for Global Studies at the University of Chicago).

About the book: Nearly 90 percent of residents in Dubai are foreigners with no Emirati nationality. As in many global cities, those who hold Western passports share specific advantages: prestigious careers, high salaries, and comfortable homes and lifestyles. With this book, Amélie Le Renard explores how race, gender and class backgrounds shape experiences of privilege, and investigates the processes that lead to the formation of Westerners as a social group.

Westernness is more than a passport; it is also an identity that requires emotional and bodily labor. And as they work, hook up, parent, and hire domestic help, Westerners chase Dubai's promise of socioeconomic elevation for the few. Through an ethnography informed by postcolonial and feminist theory, Le Renard reveals the diverse experiences and trajectories of white and non-white, male and female Westerners to understand the shifting and contingent nature of Westernness—and also its deep connection to whiteness and heteronormativity. Western Privilege offers a singular look at the lived reality of structural racism in cities of the global South.

Co-sponsored by the Gender and Sexuality Studies Workshop. 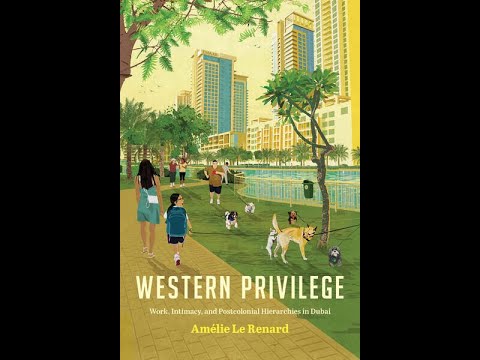 On Tuesday, October 5, 2021 the Center for the Study of Gender and Sexuality and Global Studies presented a book salon discussion of "Western Pri...