Alice in Chains: The Tragic Death of Bassist Mike Starr

Days of the New Video https://www.youtube.com/watch?v=3-XIhOZUcak

Alice in Chains story is one of tragedy marked by drugs and death. Half of the band’s original lineup would be lost to drug addiction and while a lot of hte focus is put on late frontman Layne Staley, today we’re going to take a look at the life and career of bassist Mike Starr.

Born in Hawaii in 1966, bassist Mike Starr was the eldest of two having a sister who was three years younger. His parents would split at a young age and Mike would move to Florida with his father. At the age of 9 his father would relocate to seattle and take his son Around the age of 11 or 12 Starr got a job at ihop as a dishwasher and used the money he saved to buy his first bass guitar and started his first band called Cyprus whose name he took from the bible. Starr would end up playing with drummer Sean Kinney in the band.. Starr’s early influences would be Van Halen and Jimi Hendrix with a childhood friend of Starr named Jim Hacker revealing to author David De Sola how the future alice in chains bass player was single minded with his focus in life being becoming a rockstar like Van Halen. In fact his high school yearbook would have starr saying he was going to tour with van halen when he got older and it was a dream that would come true. We’ll talk about that tour later on in this video.

Starr would admit that by the age of 12 or 13 he already was growing facial hair and had a mustache and would spend a fair bit of time in Atlantic City with his father. Starr’s mustache made bartenders think he was 18 and so he was allowed to buy drinks.


In high school around 1982 starr would play in a band named S.A.T.O taking it’s name from an Ozzy Osbourne song with one flyer promoting the band saying “Don’t Say No SATO” The band was reasaonbly successful around Seattle playing shows at the Seattle Arena and Moore Theater and was even featured on a compilation album called Northwest Metalfest. But by 1984 Starr would end up meeting guitarist Jerry cantrell and play in a band called Gyspy Rose, which was a precursor to Alice in Chains. I wanna let you guys know i’ve done a whole video on Alice in Chains glam metal days. The link is below in the description box. Prior to the classic lineup of Alice in Chains forming 1987 guitarist Jerry cantrell played some demos he was working on for drummer Sean Kinney. Also in the room at the same time was Kinney’s girlfriend a women named Melinda. Jerry would mention to Sean that he knew a bass player named Mike Starr to which Kinney replied “that’s weird because this is his sister and pointed at Melinda” and told Cantrell he had played with Mike in a handful of bands since his early teen years. Starr for his part had already met Layne a few years prior telling author Mark yarm how they met “i guess i met layne a couple of years ago, but I don’t remember it”. I was so high i couldn’t dress myself.so i wore my bathrobe with underwear on and my sunglasses and cowboy boots on my honda motorcycle on my way to the beach. Layne would recall that meeting telling an interviewer “when i met mike starr he was on a honda motorcycle in his bathrobe and sunglasses. I said to myself right there. That’s the kind of guy i want to be in a band with ”

Prior to managing Alice in Chains Susan Silver would hear a cassette from the band see them live as well as hang out with them. Silver loved the band but noticed the person they had appointed as their manager was dealing illicit substances and could not be trusted and could possibly land them in jail. The band would concur and ditch their manager and sign with Susan Silver, as well as Pearl jam manager Kelly Kurtis and Ken Deans. Deans would reveal in the book Everybody Loves our Town how Mike Starr posed the biggest headache to the band’s future recalling “Overall the guys were terrific human beings. The biggest problem by far was Mike Starr who did anything he could for himself.This is a guy who would sell spots on the guest list and get people to buy him drugs and beer beca

Alice in Chains: The Tragic Death of Bassist Mike Starr 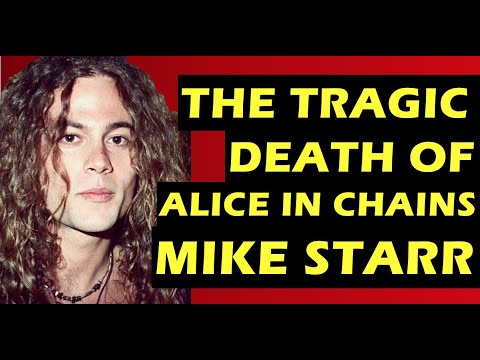