This interview is a part of DVA's ongoing Veterans' Stories project. See transcript below:

"On the way we met German soldiers going in the opposite direction. They didn’t seem to be at all interested in fighting or anything and, in fact, on one occasion we had a dray, a big dray pulled by two draught horses, was full of Germans and they were going as fast as they could in the opposite direction and when they went past and saw who we were I called out to them in German, they throw out a couple of loaves of bread for us because I said we were a bit hungry. So they kept going. Eventually we came to the, what we considered was No Man’s Land. The German exodus towards the east seemed to have dwindled and there was no one in front and we couldn’t see the British troops, they were still further away. A column of tanks stopped and the tank commander opened up his hatch to get some air I guess and I asked him in German where the British frontline was. He wasn’t very happy but said they were about 50 kilometres away and coming fast. So he put down his hatch and on went the tanks. Herbie and I kept going westward and after another day or so we came across a stream with a stone bridge over it. We thought we better hole up under this bridge because if we go much further somebody is going to shoot us or something. There was a lot of trigger happy people around the place. So we stopped there and eventually we heard tanks coming, so we had to decide whether we thought they were British tanks or German tanks. We had a good look at them in the distance and concluded that they were British tanks so we came out from under the bridge where we’d been hiding and we had a big white flag that we’d prepared and we waved this flag and the tanks came up. It was a column of tanks and the leader popped up his hatch and said ‘Well who are you?’ So we established our identity. We told him what we’d observed of German movements that we’d passed through. So he leant down and threw out a half bottle of schnapps and a packet of cigarettes and a couple of big bars of chocolate and he said ‘Get on the right side of that’ and off he went followed by a lot of little tanks. It was sort of like a mother duck with all the ducklings following." 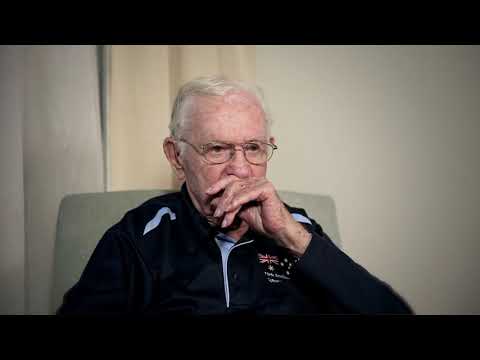 This interview is a part of DVA's ongoing Veterans' Stories project. See transcript below: "On the way we met German soldiers going in the opposi...