Bionic Buzz® got to cover the San Diego Comic Con 2022. There we got interview Omar Mora an actor, writer and comic book creator. We talked about his film "Inside the Circle," comic books "Unearthians" & "Ancient Explorers: The Lost City Of Peru" and what the future holds.

INSIDE THE CIRCLE is a quirky romantic dramedy that tells the story of a girl who believes in relationships and marriage, and who falls for a comic book and superhero-loving man who does not share her same beliefs.

THE UNEARTHIANS is an action packed sci-fi narrative where two best friends are abducted and transported into an underground base somewhere on Earth. During the abduction Mateo and Carter decide to uncover the truth when they discover the dark agenda the aliens have in store for Earth and the entire Galaxy. With help of other beings, they decide to fight this injustice. But Mateo and Carter also have a secret of their own, which they will use to their advantage; a secret that the aliens never saw coming. This is an original sci-fi story where good versus evil collide for a greater cause and where an unconventional team come together to fight fascism and the powerful ones.

ANCIENT EXPLORES: THE LOST CITY OF PERU is a hybrid novel/comic book written by Omar Mora. Mark and Luis are best friends who grew up together listening to Mark’s grandpa tell stories about his adventures and big hidden treasures. As they grew up and became more responsible, they forgot about these stories. In their adulthood, Mark and Luis opened an antique store together with items that Grandpa had collected over the years. After a few years, the business went into bankruptcy. The night they finished packing the items from the store, they went to a local bar to drink away their frustrations. In the bar, Mark and Luis met two beautiful ladies, Sandy and Jennifer. As the guys tried to flirt with the ladies, Jennifer and Sandy became interested in Mark’s compass, a compass that his Grandpa had given him before passing away, when Mark was still a kid. As the ladies reviewed the compass and the ancient symbols on it, they asked to see more of what Luis and Mark had in their store. They were very intrigued about what the compass symbols would reveal. As the four looked at the boxed up items in the store, Mark revealed that he still possessed a treasure map that he and Luis received from Grandpa when they were kids; a treasure map that had the same ancient symbols as the compass. Jennifer and Sandy explained that they believed the map and compass were real and from the fourteenth century A.D. They also revealed that they were archaeologists, so they knew what they were talking about. As they kept studying the map, it revealed something unimaginable: Paititi, the Lost City of Peru, a city that had many hidden treasures and riches. The guys were impressed with the girls and their findings. As they discovered this, something put their lives in danger, a danger that drives our adventurous guys to follow what they were meant to do in life — to become what Mark’s Grandpa taught them when they were kids: explorers of the ancients. It is then when Luis, Mark, Jennifer and Sandy begin their journey into the unknown, a magical and adventurous journey to discover the Lost City of Peru, a journey that will change their lives forever. 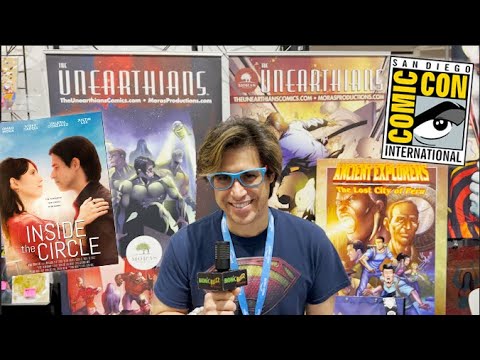 Bionic Buzz® got to cover the San Diego Comic Con 2022. There we got interview Omar Mora an actor, writer and comic book creator. We talked about his ...