After a lot of work the video is mostly okay. But the audio isn't. It was filled with this loud hissing most of the way through. I removed what I could without compromising the dialog and music quality too much, and lowered it during silent passages, but it's always there in the background and sometimes bad for short periods.

The Encyclopedia Of Indian Cinema says this about Aawaz:

Sarhadi’s best-known melodrama drew on
Pudovkin and Donskoi-style Soviet realism to
tell of an oppressive industrialist (Sapru), his
trusted foreman, Bhatnagar (N. Hussain) and
the lives of Bhatnagar’s family. The foreman
obsessed with his daughter Bela’s (Kiron)
marriage, pretends to have a large sum set
aside to secure her future. When the father of
her fiance, Ashok (R. Kumar), claims a large
dowry, Bhatnagar is distraught. He loses his
job and dies of the shock. His son Kishen
(Velani), who resented that money had
allegedly been saved for his sister, now
discovers that there is no money and, in a
drunken moment, accuses his own wife
Jamuna (Jaywant) of having stolen the cash.
Desperate to raise the dowry, Jamuna does
odd jobs and falls into the clutches of the old
industrialist who had sacked her father. The
man promises to give her the money in
exchange for sex. She takes the money and
then commits suicide. The film contains many
references to Soviet film styles, including the
heavy-handed use of low and high angles, e.g.
the shots of the overcoat-wearing Banke (A.
Hussain), a figure representing the organised
proletariat (esp. in the militant workers’ song
Araram tararam duniya ke kaise kaise gam)
and the family’s self-appointed protector. The
only print currently available has been
reconstructed from fragments of original
prints.

Speaking of which, the same source says the film is 146 minutes long, while this is 122, so much is still missing. The opening credits promise a dance by Helen, but there's no sign of her. 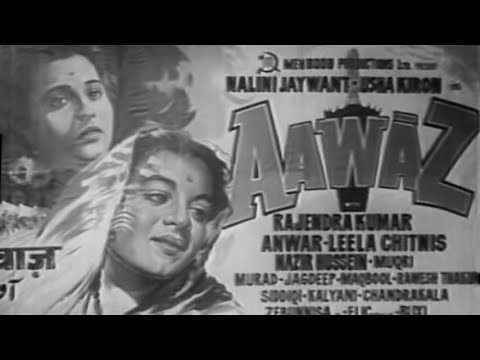