#53 Passing Joy Around the World with Veronica Vitale

Such a treat to spend time with a very inspiring artist, Veronica Vitale.

Veronica Vitale is an International Recording Artist, Music Executive and Cinematic Music Composer who gave rise to a groundbreaker "genre-defying" Avantgarde Pop and Liquid Music Genre. Veronica Vitale is also a Multi-laureate with a 3rd University Degree in Systems Science and Quantum Consciousness.

She's a bit of a dark horse in the Italian Music Scene. Her "Outsider" music career kicks off in Germany rather than Italy, as she signs her first Record Deal with FBP Records (Founded by Previous A/R of BMG Sony Entertainment) and EMG Music Group (Currently Owned by Interscope Records) in Frankfurt Am Main, a choice that pushed her abroad her own country rather than entering the dead-beat circle of Italian Talent Shows (2009/11).

Veronica Vitale is a visionary artist who stands for Performance Art. Her work explores the relationship between the performer and audience, the limits of the body, and the possibilities of the mind. Her art is Ultra Dynamic in the age of technoglitch aesthetics. Her debut album "Nel mio bosco Reale” (i.e “Throughout my Royal Grove”) was a significant hit, reaching Top 5 New Comer Artist Chart in Germany (2011) as well as leading to the Top 10 Amazon Chart Deutschland (2011) along with celebrities like David Guetta, FloRida, Sean Paul and Trains.

Veronica Vitale stands out as the only Italian to join Lady Gaga and her call to support per IFRC (International Federation of Red Cross and Red Crescent Societies) and Fukushima Earthquake and Tsunami in 2011 alongside with MTV.

Her Original Song “Il Cielo / (Heaven)” was chosen as only italian track for 7 worldwide music compilations dedicated to the cause such as “SupportJapan! Sampler” “Songs for Japan” and “Songs for Japan Newcomers Help” with Deshima, FireField Distribution, European Music Group and over 250 Music industry Partners. Veronica Vitale decided to donate all proceeds of her music single to Deutsche Rotes Kreuz & Wings of Help as stated by Wikipedia Humanitarian Response to Tōhoku earthquake and tsunami 2011.

In 2020 during Covid-19 Pandemic, Veronica Vitale released "Hymn To Humanity" a Prayer for Hope and Universal Brotherhood who became a viral web sensation within a week. 1 month later, Veronica was urged by a universal force to create a second version of the prayer on a global scale.

This was the beginning of a worldwide call for artists to inspire peace and unity in times of horror and hardship due to Covid-19 isolation and quarantine. As everyone was spending more time at home Veronica wanted to create something hopeful and meaningful of which every person could be a part.

The project goal on paper was very simple; to create a unique choir made of voices from all over the world. Everyone was welcome to join the project. All religions and beliefs.

The Worldwide Choir Special Edition of 'Hymn to Humanity' turned out to be an enormous musical feat which tore down barriers bringing together people, countries, with 1 citizen from every country across the world gathered together in one song, from the USA to Iraq, to South Africa, to Nigeria, to Tanzania, to the Chief Shuar Amazon of Ecuador.

In just 3 days Veronica received over 700 submissions as response to join her cause. The Hymn to Humanity was performed in 27 languages with ultimately 250 voices virtual choir from South Africa, Nigeria, Australia, Austria, India, Middle East and The United States of America. International Press and Newspapers such as Fox News, CBS and ABC Affiliates described the song as “The Prayer that is unifying Nations”.

The Hymn To Humanity Video gained over 500.000 streams overall on Facebook and Instagram. The Hymn to Humanity was the sparkle for Veronica Vitale and her Husband Patrick Hamilton to create "Artist United " in June 2020, a relief NPO for Artists all around the World and a Social Media Community to bring together people across the world.

I am honored to say that I was part of Veronica's World Choir project! It was truly exciting...especially seeing the final video!

If you would like to know when future episodes of this podcast are ready to view, subscribe to this channel: https://www.youtube.com/channel/UC3xEznb8gEX_AVEjIGb5L8w

#53 Passing Joy Around the World with Veronica Vitale 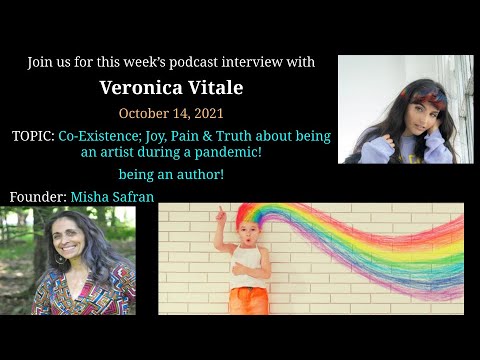 Such a treat to spend time with a very inspiring artist, Veronica Vitale. Veronica Vitale is an International Recording Artist, Music Executive and Ci...